Labour voters should also back other ‘progressive parties’ – Howlin

Labour leader Brendan Howlin has asked party supporters to give their next preferences after Labour candidates to the Green Party and Social Democrats. Video: Youtube/labour 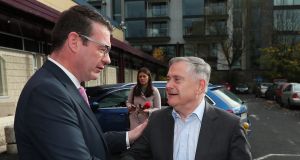 Labour leader Brendan Howlin has asked party supporters to give their next preferences after Labour candidates to the Green Party and Social Democrats to ensure there is a strong “progressive” voice in the Dáil, councils and European Parliament.

Mr Howlin told his party’s annual conference in Dublin that Labour will produce a number of “red line” demands for participation in a future government in advance of the next general election.

The Wexford TD made his call for transfers to other centre-left parties during his televised leader’s address and told delegates at the Ballsbridge Hotel: “We are not the only progressives in Ireland. ”

Labour, the Green Party, the Social Democrats and “progressive independents, some from the Labour family” hold similar views on many issues, he said.

“They share our analysis. We often vote together. And we have co-operated on new laws and policies.”

“At least one in seven nationwide would vote for progressive parties, one in five for Dublin and among younger people. The people will always need progressive doers. Those who will work to make their lives better. Who are capable of making real change.”

Labour, he said, has always been “a party of doers” but said the party may not win every seat it targets.

“If there is a constituency where we cannot have Labour, let us not have more conservatives, nationalists or populists. Let us have other progressives. As many progressive voices as possible in the Dáil and in local councils.

“To maximise the progressive voice, at the next election, I will call on all Labour voters to give their next preferences to progressive candidates, from the Green Party and the Social Democrats, and to progressive independents.”

Mr Howlin said that, before the next general election, his party will “publish a list of core ‘red line’ demands”.

“Labour will not support any Government that does not meet each and every one of our ‘red lines’.”

He said Labour will back the introduction of a digital services tax “so the giants of the internet pay a fair share of tax”.

The Government is currently resisting pressure to agree to European Commission proposals for an EU-wide 3 per cent digital sales tax.

Mr Howlin said that if the SDLP, its sister party in Northern Ireland, merged with Fianna Fáil, Labour “and others will step in”. Earlier this week, he said Labour and UK Labour could organise and compete in elections in the North.

“We will ensure a pluralist option in the Labour tradition is available,” he said.

Mr Howlin argued that the State must take a stronger role in solving the housing crisis, in reforming the health services and in rolling out broadband to rural Ireland.

He said “private property must take second place to the public’s welfare”.

“Our modern, socialist vision of the market economy mimics the obvious successes of Denmark, Sweden and the Netherlands. We would use State agencies to deliver rural broadband.

“We need a strong State to regulate private rents, and to build 80,000 homes over the next five years. We have identified where we would find €16 billion to do just that.

“And above all, we need the State to lead on climate action. We are committed to creating a single-tier, publicly owned healthcare system.

“We want to create a coherent State approach to social care and disability, working with community and voluntary bodies.”