Families feel the pinch as cost of living rises to over €50,000 a year

Despite recovering economy, many households will struggle as price of essentials rise 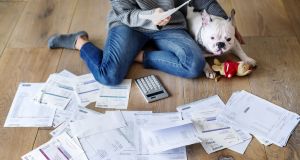 Those who bought a property at the height of the boom might find themselves spending €52,593 a year. Those who bought this year could spend a total of €47,623 over the next 12 months. Photograph: iStock

When the cost of groceries, mortgage payments, utility bills, motoring, phones, the most modest of social lives, home insurance, car insurance, school and childcare and all the other things that most of us consider essential to live are totted up, a typical family who bought even a small home during the boom years are likely to spend more than €50,000 over the next 12 months.

That is an after-tax figure and goes some way towards explaining why two adults earning an average wage still struggle to keep their heads above water despite the fact the economy has recovered in recent years.

According to independent figures compiled by this newspaper, coupled with the seventh annual cost-of-living survey published this morning by AA Home Insurance, prices in key areas have climbed over the last 12 months and have largely wiped out any savings that people can expect as a result of tax changes rolled out in last month’s budget.

According to the figures from the AA, the annual cost of owning and maintaining a family home now stands at €16,374, an increase of over €350 compared with 2017. And that figure does not include food, entertainment, education, clothes or any of the other things people need to stay alive.

The AA carries out a detailed calculation each year which looks at the total cost of owning a house and subsequently running one in Ireland. Mortgage and property tax are calculated based on the current average property price. All other expenditure – from broadband and heating to the cost of domestic appliances – is researched and calculated according to prices as of October 2018.

Looking at the figures going back several years suggests Irish consumers have been on a real rollercoaster of costs over the past decade.

Increases in mortgage repayments and a jump in energy costs are the key drivers behind the €350 per annum increase in the annual cost of owning and maintaining a family home – the third successive year the costs have climbed, the “Cost of Running a Home” analysis suggests.

That figure is a key reason why many of us are not feeling any real impact from a sustained economic recovery.

“Another year of rising household costs is the last thing that homeowners would have wanted to hear but it is, unfortunately, the situation that we find ourselves in,” says Conor Faughnan, the AA’s Director of Consumer Affairs.

“While the continued climb of house prices has been one of the major stories of 2018, it’s not just the cost of mortgage repayments or getting your foot on the property ladder that have risen in the past 12 months,” he adds.

“Home heating and electricity costs have also surged in the past year, meaning that even those who were fortunate enough to acquire their home when property prices were a little lower have seen their wallets take a significant hit.

“Overall, the percentage of the average national wage which must be put aside to cover these costs has dropped slightly, by approximately 1 per cent [but] many homeowners will be concerned to see the cost of most of their household bills increasing. Meanwhile, these latest figures also represent bad news for those who are currently renting and attempting to purchase their first home as meeting the deposit requirements while still having to cover many of the bills that come with home ownership makes getting on the property ladder a significant challenge,” Faughnan adds.

He says “urgent action in terms of the available housing stock is needed” if the issue of rising house prices is to be tackled “but questions also need to be asked of what supports can be made available to those struggling to meet these costs”.

While the AA bases its calculations on those of a new buyer, there is also the “negative equity generation” – homeowners who bought their house at the peak of the boom. And the picture painted for this cohort is bleaker still.

According to the AA figures, the group who bought a house in 2007 at the very height of the boom, pays €5,605.44 more on their mortgage repayments than their counterparts who purchased their homes in the third quarter of this year.

Maintenance, repair and contingency funds is the second single most expensive bill for Irish householders and has increased by 0.7 per cent on 2017. The AA estimates that the average homeowner is likely to spend or set aside €1,255.56 each year to keep up with wear and tear. This figure equates to almost 8 per cent of the overall estimated cost of owning and running a home.

Among the variables that remained the same as or close to last year were television licence costs at €160, property tax at €405, and AA Home Membership at €125.88.

Other costs included in the AA Home Insurance study were: home insurance which is calculated at about €566.98, telephone and broadband bills at €434.62, household appliances at €550, household cleaning products at €311.03 and domestic refuse collection at €306.07.

Last year the price of home insurance was put at €547.81 while telephone and broadband bills were averaged at €468.66. The cost of household appliances was said to be €573.82 while the cost of household cleaning products was put at at €281.85; and domestic refuse collection, which costs an average of €304.51.

Adding up the other essentials

The AA figures, while comprehensive, only look at the costs of keeping a roof over your head and don’t factor in fairly important elements such as food, transport and all the other things that most people would struggle to live without.

To work out how much a typical family of two adults and two children will need to spend over the next 12 months, we used the standard financial statement that banks ask customers to fill in if they are trying to restructure debts. Among the costs covered are health insurance, transport expenses, food, clothes and grooming, entertainment, childcare, education and mobile phones. So, how are those costs bearing up this year?

There is a huge number of plans and a huge number of variables when it comes to health insurance. We compared three broadly similar family-friendly plans. Laya Healthcare’s Essential Connect Family plan will cost two adults and two children €3,081 compared with €3,052 last year. The VHI’s Family Plan Level 1 will cost €2,537, down from €2,805 last year. A Family Focus plan from Irish Life Health, meanwhile, is €3,673 – the same as last year. The average comes out at €3,097, compared with €3,176 in 2017.

The cost of comprehensive insurance for two adults depends on many factors – notably location, driving history, no-claims bonus and type of car – and although prices have fallen back slightly compared with last year’s highs, our notional family can expect to have little change out of €1,150 this year.

Schools in Ireland are obliged to open for 183 days a year, so if both parents are working, then after-school childcare costs will have to be added to the bill

There has not been much movement in supermarket prices over the last year – either up or down so if the average Irish household spends €175 a week on groceries, the total bill will come in at €9,100 compared with €8,840 last year, although that doesn’t factor in a Christmas blow-out of any kind.

According to the Insolvency Service of Ireland expenditure guidelines, the minimum an adult needs to cover the cost of “social inclusion” is €28.97 a week – and that is to cover the cost of “sports activities and social events such as visits to the cinema”. That seems somewhat mean to us so it we give each adult an extra tenner a week to blow on themselves and an extra €10 to cover each child each week, the annual spend on social inclusion for a family of four will come to €5,092.

According to the annual school costs survey published by Barnardos in August when the cost of clothes, shoes, books, stationery, classroom resources and the voluntary contribution are totted up, a child going into senior infants will cost €360, while the cost of sending a child into secondary school climbs to €765. If we allow a further €500 to cover costs for trips and extra-curricular activities and assume our notional household has one child in senior infants class and one in first year, then the annual cost of a free education climbs to €1,625 – down slightly on last year’s figure.

Schools in Ireland are obliged to open for 183 days a year, so if both parents are working, then after-school childcare costs will have to be added to the bill. Our notional family have found themselves a childminder who charges €170 a week for the school year of 36 weeks, which is a total each year of €6,120. Combining that and the education costs, the total spend rises to €7,745.

Assuming the man in our notional household visits the barber eight times a year and his partner visits a hairdressers once every 10 weeks (plus once for a special occasion), the total cost of haircare alone will reach €800. If the family then spends just €50 a month on clothes, the amount needed rises to €1,400.

When you put it all together, that means the average person who bought a home at the average price in 2018 could easily spend a total of €47,623 over the next 12 months. Those who bought a property at the height of the boom might find themselves spending €52,593. And that is without taking any holidays or factoring in Christmas, birthdays or anything that could be classified as a significant treat over the course of a year.

Given that there aren’t very many households where the combined pre-tax income tops €100,000, is it any wonder so many people are still feeling the pinch?