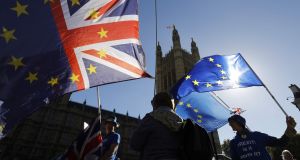 An all-UK customs backstop would have to stay in place until a new “better” deal is agreed in the context of the permanent future relationship deal. Photograph: Tolga Akmen/AFP/Getty Images

When British and European Union negotiators resume their Brexit talks on Monday they will re-enter what Sabine Weyand, the EU’s deputy chief negotiator, has called “the tunnel”, a mutually-agreed shutdown of external comment and spin which is supposed to facilitate their work.

This time, however, according to upbeat weekend stories from Brussels, London and Dublin trumpeting the “imminence” of a deal on the crucial Irish backstop – a guarantee that there will be no hard border on the island of Ireland no matter what the outcome of future trade talks between the EU and UK – may be light at the end of this one. British prime minister Theresa May has a cabinet meeting on Tuesday, and the Commons goes into recess on Wednesday when EU ambassadors also meet again to assess progress.

But where are they?

When the British solemnly agreed with the EU last December in the joint agreement to the necessity for a legally enforceable insurance – backstop – against a hard border in Ireland, they fudged the issue of how that would be achieved.

The EU took the view that this could be accomplished only by some forms of controls on the Irish Sea between the UK and Northern Ireland. London decided, however, that this was a red line it would not cross, and suggested instead that it would create an all-UK customs arrangement with the EU.

Since then we have been struggling to reconcile the two positions.

Among the approaches currently being mooted, sources here and in Dublin suggest, is a formula that would remove EU-proposed references to an exclusively Northern Ireland customs union framework from the backstop, but leave in place strict provisions for the North’s continued, and separate, regulatory alignment with the EU (and checks on the Irish Sea or in the marketplace on goods and animals travelling between the North and Britain).

That could be done, sources say, either by removing references to customs arrangements, but leaving in place all their ingredients – like those deconstructed dishes so-favoured by chefs in reality cooking shows – or by removing all the Northern Ireland-specific customs-related provisions in their entirety, and relying instead on the British proposals for an all-UK customs arrangement with the UK.

That might be acceptable to the EU and Ireland, but only if there was agreement on how to frame the UK proposal of a “temporary” all-UK customs arrangement in such a way as to make it a binding withdrawal agreement commitment.

This version of a backstop would mean that after transition – and before the much-promised comprehensive future relationship is negotiated – the UK would be obliged to remain in a customs relationship with the EU, but would also have to put regulatory barriers at Dover and Channel ports.

The removal, however accomplished, from the protocol of references to a Northern Ireland-only customs arrangement could make the Northern element of the backstop easier to sell to Tory unionism – the customs border is particularly toxic for reasons that are not altogether clear.

And it might be easier to impose on the DUP as a less-than-perfect but necessary solution to avoid a no-deal Brexit. A confrontation that everyone bar the DUP now believes will be necessary.

To date the idea of an all-UK customs union solution has been legally fraught because the EU insists that the idea is legally precluded from a binding article 50 “divorce” agreement. It is, they say, a matter for the future relationship treaty, currently being drafted only as a political declaration.

There is talk of trying to construct a legal “bridge” between the two agreements. But the issue of enforceability of such a provision is crucial.

Ultimately, an all-UK customs backstop would have to stay in place until a new “better” deal is agreed in the context of the permanent future relationship deal.

A “better” deal is one that would better safeguard the Irish frictionless border – one logically, it appears to most observers, that involves British continued membership of a customs union and most single-market regulations. The British continue to insist that will not happen.

Effectively, in other words, by signing up to an all-UK customs backstop the UK, though it does not admit it publicly, would be committing itself to a permanent customs union arrangement for itself for the sake of not signing up to separate arrangements for the North. As the DUP rightly keeps saying “the backstop is for good”.

In what is effectively a private acknowledgment of that reality, and fearful that the EU and Ireland could forever block the ending of the backstop by insisting on what the UK would see as an unrealisable standard for a “better” deal, British negotiators are understood to have been trying to explore the idea of third-party arbitration.

The draft protocol contains a reference to the backstop remaining in place “unless and until” a better deal is agreed. Could the interpretation of that phrase and the ending of the need for a backstop be given to an independent third party? Not, of course, the British say, the Court of Justice of the EU. . .

While we may be close to an agreement on the backstop, the complexity and interconnectedness of the few remaining issues makes agreement far from certain. The light at the end of this single-track tunnel may not be daylight, but a fast-approaching no-deal train.