Cork’s most famous libertine about to make musical history 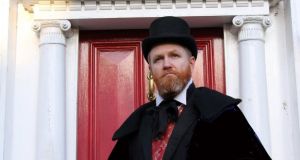 Sean Óg Ó Duinnín who plays Sir Henry in the musical which comes to Cork’s Opera House for one night only on February 13.

He may not have given his name to Cork’s most famous rock venue which once played host to a fledgling Nirvana but what matter, Leeside’s most famous libertine, Sir Henry Browne Hayes is about to make some musical history himself.

Born in Cork in 1762, the son of a wealthy merchant, Henry Browne Hayes managed, despite a life of gambling and womanising to earn himself a knighthood and become Sheriff of Cork city before being shipped as a convict to New South Wales.

Now a musical entitled simply ‘Sir Henry’ by Cork composers Alan Kiely and Kevin Connolly chronicles one of the most notorious chapters of Sir Henry’s colourful life when he abducted a wealthy heiress and married her against her will in an episode that scandalised Cork society.

Former RTÉ Head of Music, Cathal Mac Cabe, who is directing the production of ‘Sir Henry’ at the Cork Opera House, explained that the 18th century Cork philanderer was virtually a natural subject for a musical given his outrageous behaviour and fall from grace.

“The musical is based on documented fact and Cork legend and traces the abduction in 1797 of 21- year old Mary Pike, who came from a wealthy family of brewers, millers and glassmakers and who was due to inherit over £20,000 which would have been a fortune at the time,” he said

“Sir Henry, aided by his friend, Coughlan abducted Ms Pike as she left the home of her uncle at Vienna Woods and took her to his house at Vernon Mount where in spite of her protestations, she was forced to go through some form of marriage ceremony conducted by a man dressed as a priest.”

Mr McCabe explained that Ms Pike refused to consider it a marriage and was eventually rescued by relatives while Sir Henry fled and went on the run for two years but after €1,000 was offered for his capture, he called to an friend and suggested that he should get the reward and he was arrested.

Tried and convicted, Sir Henry was condemned to death but the sentence was commuted to life imprisonment and he was shipped as a convict to New South Wales only to be pardoned in 1812 and he returned to Cork where he died in 1832 and was buried in Christchurch on South Main Street.

Mr McCabe said that the several of the cast and production crew were involved in the highly successful ‘Murder at Shandy Hall’ starring Patrick Bergin while ‘Sir Henry’ has already played to full houses in Macroom during a five-night run in November.