Domestic customers will be charged when using in excess of 213,000 litres per year 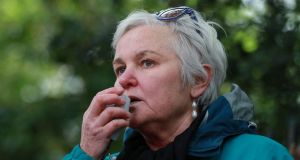 Brid Smith said there was a deliberate ambiguity in the wording of the excess use charges to allow water charges by ‘the front, back or side door’. File photograph: Nick Bradshaw/The Irish Times

Charges to domestic customers will only apply when water in excess of 213,000 litres per year is used.

The rules and processes relating to excess use charges will be determined by the Minister for Housing Eoghan Murphy.

Irish Water said a public consultation would be carried out to determine what constitutes excess usage.

Ms Smith told Newstalk Breakfast there was a deliberate ambiguity in the wording to allow water charges by “the front, back or side door”.

She said the money spent on setting up Irish Water would have been better spent sorting out the 30 per cent level of leaks within the archaic system.

The high level of leaks begs the question how “excessive usage” is going to be detected in areas where there are shared pipes.

“By January next year we may be facing into a general election and people will be facing the first bills. This is going to be a huge controversy. There will be another series of toxic responses.

“Excessive charges, if ratcheted up will become a politically toxic issue and people won’t stand for it.”