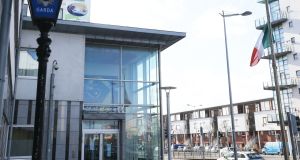 The Tricolour flies at half mast outside Ballymun Garda station on Sunday after the death of a senior detective. Photograph: Stephen Collins

An investigation is under way into the death of a senior detective in a north Dublin Garda station.

The officer, who was in his 50s and one of the most seasoned detectives on the force, was found dead in an office at Ballymun Garda station, on Saturday night.

No foul play is suspected and nobody else is being sought in connection with the officer’s death. The incident is being treated as a personal tragedy.

A Garda-issue firearm has been taken from the scene for analysis. The Tricolour was flown at half-mast outside the station yesterday as colleagues were trying to come to terms with the officer’s unexpected death.

While no foul play is suspected, the Garda Síochána Ombudsman Commission (Gsoc) is legally obliged to investigate all such cases. The Garda is also carrying out an investigation.

“Gardaí are investigating the sudden death of a serving member following an incident at Ballymun Garda station,” a statement said.

“The alarm was raised shortly before 9pm on Saturday. The scene was examined by the Garda technical bureau and the coroner was notified.

“Foul play is not suspected and the matter has been referred to Gsoc.”

A postmortem examination was due to be carried out.

Garda sources said there was a deep sense of shock across the force at the death of the officer, who was well known nationally and highly respected.

He played a leading role in the investigation into the fatal gun attack in the Regency Hotel in Whitehall two years ago.

That incident, carried out by a group of armed men at a boxing tournament weigh-in, sharply escalated the Kinahan-Hutch feud which was just beginning at the time.

Dublin man David Byrne was killed in that attack and a murder trial is currently under way at the Special Criminal Court in relation to that shooting.

Patrick Hutch (25), of Champion’s Avenue, Dublin 1, is currently on trial for Mr Byrne’s murder. The officer who died on Saturday night had been due to give evidence in coming days.

He had for most of his career been at the forefront of investigations into homicides and organised crime generally.

While based in Ballymun at the time of his death, he had spent a large portion of his career in Blanchardstown.

One of the highest profile inquiries he played a key role in was securing convictions for the killing of teenager Daniel McAnaspie.

The 17-year-old was in the care of the HSE at the time of the killing in February 2010 at Tolka Valley Park, Blanchardstown.

In March of last year, Richard Dekker (31), from the Blanchardstown area, was found guilty by a unanimous jury verdict of the teenager’s murder.

A month earlier Trevor Noone (29), also from Blanchardstown, pleaded guilty to manslaughter for his role in the youth’s death.