Varadkar and May expect breakthrough deal with Stormont visit 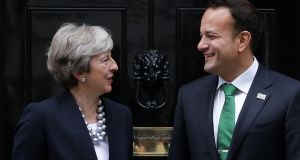 Theresa May and Leo Varadkar: sources said it was unlikely the two leaders would attend negotiations unless they had relative certainty a deal between the DUP and Sinn Féin was imminent. Photograph: Daniel Leal-Olivas/AFP/Getty Images

Taoiseach Leo Varadkar and British prime minister Theresa May are scheduled to travel to Stormont on Monday afternoon in the expectation that the DUP and Sinn Féin will formally sign off on a deal to restore the Northern Ireland Executive and Assembly.

Downing Street confirmed on Sunday night that Ms May will meet northern political parties at Stormont on Monday. A spokesman for the Taoiseach said Mr Varadkar and Ms May would “assess the state of play” in the negotiations.

Well-placed sources said it was unlikely the two leaders would attend the negotiations unless they had relative certainty that a deal between the DUP and Sinn Féin was imminent.

Downing Street said Ms May will “take part in a series of meetings with political parties at Stormont House and will encourage them to reach a resolution for the benefit of all the people of Northern Ireland”.

“She will make clear that the UK government remains fully committed to the restoration of power sharing devolution and the Belfast Agreement,” added a Downing Street spokesman.

He said Ms May “will also remind the parties of the many pressing issues facing Northern Ireland and restate her strong belief that a fully functioning Executive, empowered to take decisions over local matters, is the best way to serve the interests of the whole community”.

A spokesman for Mr Varadkar said he would “use his visit to encourage the parties to reach an agreement so that functioning institutions can commence work again in the interests of the people of Northern Ireland”.

“The Government has consistently said that the restoration of the institutions is essential in the context of full implementation of the Good Friday agreement, and that it will continue to work very closely with the British government to support the northern parties to achieve this outcome,” he added.

Stormont has been without a fully functioning Executive and Assembly since the late Martin McGuinness resigned as deputy first minister in January last year.

Four series of talks last year failed to resolve differences between the DUP and Sinn Féin over issues such as the Sinn Féin demand for a stand-alone Irish language act, same-sex marriage legislation and Troubles-related inquests.

But talks in which the new Sinn Féin president, Mary Lou McDonald, was centrally involved last week did make significant progress, with a big shift in mood on Friday when several sources said the parties were close to agreement.

While the general view on Sunday night was optimistic, sources also entered some notes of caution. The main caveat is over whether DUP leader Arlene Foster can sell the deal to all of her Assembly members and MPs and to her support base.

As a means of countering any protests, it is understood the DUP and Sinn Féin will not release all the details of the expected agreement immediately, and contentious matters might be presented in a programme for government that would take some time to roll out.

If the deal is confirmed on Monday or later this week it could take towards the end of the month before the Executive and Assembly are reinstated. One senior source said a final deal was unlikely to be signed off on Monday but it seemed likely it would happen later this week.

Special legislation is required at Westminster to bring back Stormont. Westminster however is in recess and does not return until Tuesday week, February 20th.

But the legislation can be put in place in a matter of days, according to sources. The Downing Street spokesman said Ms May will confirm to the parties that the British government “remains ready to introduce legislation to enable the re-establishment of an Executive as soon as possible following an agreement”.