Post-Brexit prices may spiral and customer rights may not be guaranteed, says watchdog 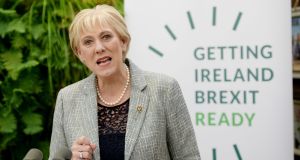 Minister for Business, Enterprise and Innovation Heather Humphreys: there are steps consumers must take “to lessen the potential impact” of Brexit. Photograph: Alan Betson

A hard Brexit at the end of October could hit many thousands of Irish people who shop on UK websites almost immediately with a dramatic curtailment of rights and a significant spike in prices on the cards, the State’s consumer watchdog has warned.

One of the key rights consumers have when buying from EU-based retailers – including those in the UK – is the right to a refund if they change their mind,

According to new research from the Competition and Consumer Protection Commission (CCPC) almost half of those who had shopped with UK-based online retailers had returned items.

Almost three-quarters had done so because the product either did not fit or suit their needs or because they had simply changed their mind, but the CCPC has warned that in the event of a no-deal Brexit, “these rights may not be guaranteed”.

Prices could also climb significantly as products bought from the UK may attract new taxes and duties including customs duty, excise duty and VAT, the CCPC warned.

It carried out research among 1,000 adults across the country and found that 72 per cent of Irish consumers had bought online from a company based in the UK in the last two years.

Almost a third said they had shopped with such websites at least 10 times over the same time frame, with the category with the highest share being clothing, followed by electronics and footwear.

When asked about changing their shopping behaviour as a result of Brexit, the research found that 31 per cent plan to buy more from websites in other EU countries with 25 per cent saying they had plans to change their online shopping habits.

A similar percentage said they would buy more from Irish companies either in-store or online.

“When you buy online from an EU-based business, there are protections which ensure that you have the opportunity to change your mind and also you have very strong consumer rights if something goes wrong, for example if you don’t get your items delivered,” said CCPC chairwoman Isolde Goggin.

“When the UK leaves the EU, these protections will no longer be guaranteed when buying from UK-based retailers. Whether you are a frequent or occasional online shopper, our message is simple – before you buy, check where the business is located and read the terms and conditions on the website. Be sure to check in particular the returns policy and see if you can return goods if you change your mind.”

Speaking, ahead of the start of the CCPC campaign, Minister for Business, Enterprise and Innovation Heather Humphreys said the Government, its agencies and the business community had been “working hard to prepare Ireland for the impact of Brexit”.

However, she said “there is still much uncertainty as to what is going to happen come October”.

She said that, as consumers, there were steps people could take “to lessen the potential impact”.

“I am urging everyone to take heed of the information provided by the Government and to visit gov.ie/Brexit to find out further information about how Brexit will impact you and the steps you can take now.”