Political deadlock: NI system is same as that which agreed 1994 ceasefire

When Troubles started in 1969, only Unionist Party had power in Northern Ireland 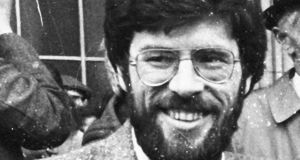 It wasn’t until the 1980s that Gerry Adams (above) and Martin McGuinness began driving forward the policy of the Armalite and the ballot box. Photograph: Pat Langan

The difference between the politics of a quarter of a century and a half a century ago in Northern Ireland is that in 1969, there was a single-party unionist government while at the time of the first IRA ceasefire in 1994 the five parties who now dominate deadlocked politics in the North were well-established.

Northern Ireland had its own parliament from 1921 which ran right through to the proroguing of Stormont in 1972. It was dominated by the Unionist Party (now called the Ulster Unionist Party) which usually held two-thirds and sometimes more of the parliament’s 52 seats.

Through the 1960s, against complaints of widespread unionist discrimination against nationalists and Catholics, the push for civil rights began.

Prior to that period, attempts to highlight the plight of Catholics were thwarted by the convention whereby it was not possible to raise at Westminster any issue that was the direct responsibility of a Stormont minister.

London appeared content to turn a blind eye. Holes began to be knocked in that protocol however when in 1966 future SDLP leader Gerry Fitt was elected MP for West Belfast for the Republican Labour Party.

In December 1968 – with growing unrest, nationalist demands for change and an international light beginning to shine on the injustices in Northern Ireland – the unionist prime minister Cpt Terence O’Neill warned that “Ulster stands at the crossroads”. He appealed for reforms to meet some of the demands of the protesters.

Too little, too late

It was too little and too late and O’Neill, who was viewed as standoffish even by many of his party colleagues, could not get the traction or the support to make the necessary transformations to stave off the Troubles to follow.

Just months before the Battle of the Bogside in August 1969, what was called the “crossroads” Stormont election was held in which pro- and anti-reform unionists won 39 of the 52 seats, with the rest scattered between the Nationalist Party, the Northern Ireland Labour Party, Republican Labour and Independents.

Such were the divisions within unionism that, in April 1969, two months after the election, O’Neill was forced to concede defeat and resign.

Stormont under unionist rule stumbled on, first under prime minister James Chichester-Clark and then Brian Faulkner, until March 1972 when parliament was suspended by Ted Heath’s Conservative government and direct rule from Westminster was introduced.

The Unionist Party when Stormont folded had been the absolutely principal party for more than 50 years. But even at that stage, new unionist, nationalist, republican and centre-ground parties were formed that would play pivotal roles in all the political travails and tests to follow leading up to the powersharing agreement of Good Friday 1998.

The Alliance Party was formed in April 1970, followed by the Social Democratic and Labour Party (SDLP) in August the same year.

It took Ian Paisley, who was O’Neill’s chief nemesis, until September the following year to form the Democratic Unionist Party (DUP).

Sinn Féin, in its Provisional guise, came into existence in December 1969 as a result of a split from Cathal Goulding’s more Marxist, less abstentionist Official Sinn Féin.

But it wasn’t until the 1980s that Gerry Adams and Martin McGuinness began driving forward the policy of the Armalite and the ballot box that was coined by its director of communications, Danny Morrison. That ultimately led to Sinn Féin taking seats in Leinster House and Stormont but not in Westminster.

When the Troubles started in 1969, the Unionist Party was the only one with any power in Northern Ireland.

But in the space of two years, the five-party system that now prevails had been created. It would take them until 1998, four years after the first IRA ceasefire, to begin the resumption of local power, first through the 1998 Belfast Agreement and then through a period of stop-start Northern Executives at Stormont, which currently is in stop mode.