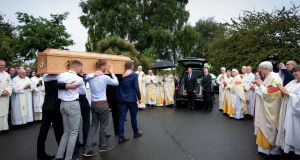 “He was surrounded by family and friends and was very much at peace. As was the case with lots of things he did, he left on his own terms.”

Fr Coote, the administrator of the Church of St Thérèse in Mount Merrion and St Laurence O’Toole church in Kilmacud, died at the age of 55 last Wednesday.

“By any definition Tony was a wonderful, inspirational leader. His ability to mobilise people for a cause was second to none,” David Coote told mourners at the end of the priest’s funeral Mass in Mount Merrion on Monday.

His brother, he said, “saw the good in every situation and with that good came the opportunity to connect with people, another one of Tony’s great strengths – connecting people, bringing them together, the ultimate connector”.

Their mother brought Tony into the world 55 years ago, he said. “So we all owe her a great debt of gratitude for giving us this gift. She guided us all through our lives and I can tell you very clearly that’s where Tony got his strength, determination and resilience. From our mother. Thank you Mam.”

In his homily Fr John Kelly said the months since his diagnosis in February 2018 became a time of grace for Fr Coote. “Each one of you and countless others nourished Tony by your great kindness and persistent love. I know that Tony was overwhelmed by your tenderness and thoughtfulness and that became his most powerful medicine.”

The disease “may have destroyed his body, death may have broken the bonds of skin and flesh, death cannot break the bond of love”.

Mass celebrant Fr Declan Blake spoke of how, two weeks ago, he and other priests were asked by Fr Coote to go to the Dundrum shopping centre to get him clothes.

Since Fr Coote could no longer speak, he indicated with his eyes what he wanted. “So we asked him ‘what do you want, a top? No. Trousers? No. Socks? No. He spelt out on the board ‘pyjamas’. He wanted new pyjamas. Anyway, it was like an episode from Fr Ted going round there trying to find pyjamas.”

Then he wanted to go to the cinema. They ended up seeing Once Upon a Time . . . in Hollywood. “That was the last movie he was to see.”

Fr Blake concluded: “As the second reading said ‘he fought the good fight, he ran the race to the finish, he kept the faith. And may Tony rest in peace.”

Final prayers of commendation were said by another of Fr Coote’s seminary classmates, new Bishop of Cork Fintan Gavin.

Symbols brought to the altar at the beginning of the Mass, reflecting Fr Coote’s life and interests, included a squash racket and ball, the Thomas Merton book The Seven Storey Mountain, a photograph of UCD volunteers in Haiti, a photograph of him receiving an honorary doctorate at UCD last year, and a Bible.