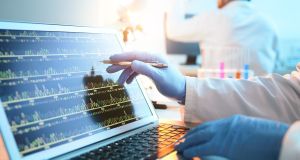 Lead author Dr Edmund Gilbert, who is based at RCSI, said the work was helping understand the role of genetic variation in human disease. File photograph: Getty

A complete genetic map of Britain and Ireland, generated by scientists for the first time, provides proof of common ancestry going back hundreds of years.

The addition of a genetic map of Scotland by geneticists at the Royal College of Surgeons in Ireland and the University of Edinburgh completed the data.

The map identifies “genetic clusters” – common genetic characteristics in particular regions – using genomic analysis, and provides evidence of Ireland’s strong links to southwest Scotland and the Hebrides going back to the sixth century. All told, there are 43 distinct clusters identified across Britain and Ireland.

The study provides scientific evidence of what is known from history, explained professor of human genetics at the RCSI School of Pharmacy and Bimolecular Sciences Gianpiero Cavalleri, but also is vital to identifying the emergence of genetic diseases in populations, and to perfecting treatments for the individual after their personal “genetic variants” are factored in – this was indicated, for instance, in how epilepsy arises.

“The discoveries made in this study illustrate from the perspective of DNA, the shared history of Britain, Ireland and other European regions. People are well aware of historical migrations between Scotland and Ireland but seeing this history come alive in the DNA is nonetheless remarkable,” he added.

The study, published in Proceedings of the National Academy of Science on Monday, found strong genetic connections between the Scots and Norse Vikings. Moreover it sheds light on the Gaelic component to the Icelandic gene pool, including direct links to Ireland.

The researchers investigated the DNA of more than 2,500 volunteers with extended ancestry from specific regions across Britain and Ireland. “The new data from Scotland means this is the first time the genetic map of the UK and the Republic of Ireland can be seen in its entirety,” said Prof Cavelleri.

Scotland is divided into at least six clusters of genetically similar individuals linked geographically; the Borders, the southwest, the northeast, the Hebrides, Orkney and Shetland. The southwest and Hebrides “share particularly strong affinity for clusters of Irish ancestry”.

These clusters are at similar locations to Dark Age kingdoms, such as Strathclyde, Pictland and Gododdin.

“It is remarkable how long the shadows of Scotland’s Dark Age kingdoms are, given the massive increase in movement from the industrial revolution to the modern era. We believe this is largely due to the majority of people marrying locally and preserving their genetic identity,” said Prof Jim Wilson of the University of Edinburgh’s Usher Institute.

The results suggest these kingdoms may have maintained regional identities that extend to the present day. The modern genetic landscape of Britain and Ireland also mirrors “splits in early languages”, classified as “Q-Celtic” (ie Scottish, Irish and Manx Gaelic) and “P-Celtic” (Welsh, Cumbric, Cornish, Old Brythonic and Pictish).

Shetland is located between Norway and mainland Scotland and was found to harbour the largest proportion of Norwegian-related ancestry, a consequence of the Norse Viking migrations that began in the eighth century. Ancient settlers in Iceland shared the greatest genetic affinity with those on the western Isles of Scotland and the northwest of Ireland.

Lead author Dr Edmund Gilbert, who is based at RCSI, said the work was helping understand the role of genetic variation in human disease.

“Understanding the fine scale genetic structure of a population helps researchers better separate disease-causing genetic variation from that which occurs naturally in the British and Irish populations, but has little or no impact on disease risk,” he added.

The collaboration illustrates how citizens can contribute to science. The Irish DNA Atlas is an ongoing study. Members of the public with ancestry from a specific part of Ireland can participate by contacting Séamus O’Reilly from the Genealogical Association of Ireland at theirishdnaatlas@gmail.comThe research is a collaboration between the University of Edinburgh, University of Bristol and the Genealogical Society of Ireland with funding from Science Foundation Ireland, the Scottish Funding Council, Wellcome Trust and the Medical Research Council UK.