As a no-deal Brexit grows increasingly likely, so too is the imposition of some form of border controls on this island

Once Brexit happens homes, like those of Pat Rice, will be divided by the border between the UK and the European Union. 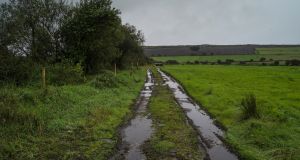 A fence forms the Border between Northern Ireland (left) and the Republic of Ireland (right) in Co Donegal. File photograph: Dan Kitwood/Getty

It seems safe to assume the 25th anniversary at the weekend of the first IRA ceasefire passed unnoticed by a British government obsessed by its pursuit of Brexit, deal or no-deal. That’s hardly surprising as our shared history – and the responsibilities arising from it – appear to mean little to a prime minister intent on whatever political chichanery is necessary to exit the EU irrespective of the implications of the re-imposition of a border on this island.

The Belfast Agreement helped to transform lives by bringing an end to the systemic violence that had beset Northern Ireland for the previous 25 years. Unfortunately, the political institutions set up as part of the agreement have not proved to be as resilient and are currently in abeyance. But that is all the more reason for great care in decisions that could undo its principal achievement – peace.

As a no-deal Brexit grows increasingly likely, so too is the imposition of some form of border controls on this island. The Irish Government will have to impose checks on cross border trade to meet its obligations to protect the EU single market. The British insist they will not do the same but, under the terms of engagement set by the World Trade Organisation (WTO), all countries are effectively obliged to impose border checks in the absence of a trade deal.

The Brexit referendum debate in the UK saw very little attention paid to the implications for Northern Ireland of leaving the EU. That pattern has continued during much of the political manoeuvring of the past three years with party politics at Westminster taking precedence over Britain’s responsibilities to this island. The penny has finally dropped with some of those MPs who are locked in a battle with Boris Johnson to prevent a no-deal Brexit. But it may be too late.

As events in Westminster lurch from the extraordinary to the bizarre, the response from this side of the Irish Sea must be measured. Inflammatory rhetoric should be avoided and there must be no cover for those who regard the use of violence as legitimate. There was no justification for the violence that largely ended 25 years ago and there is no justification for any return to it now.

In a speech marking the anniversary of the IRA ceasefire, Sinn Féin leader Mary Lou McDonald said the cessation had demonstrated political differences are not intractable and can be resolved with good leadership. Her suggestion that now is the time to prepare for Irish unity was not helpful but her commitment to dialogue and discussion on how to proceed was welcome.

The restoration of the Stormont institutions would be a positive step to protect peace. But the toxic politics of Brexit render that prospect unrealistic in advance of a general election in the UK. In the meantime, all eyes are on a brazen battle for political advantage at Westminster.

1 With Lincoln looking on, the crowd dropped to their knees as 7pm approached
2 In six months we will be in the grip of a 1980s-style recession
3 ‘Tralee felt friendlier than Killarney. We discovered a different welcome there’
4 Luke ‘Ming’ Flanagan bares his bottom half to European Parliament
5 Coronavirus: 25% of new cases arising in the community with no know link to other cases
Real news has value SUBSCRIBE