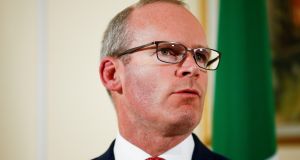 It is understood that at Tuesday’s briefing Minister for Foreign Affairs Simon Coveney will not discuss in detail any preparations for dealing with the Border in the event of no deal. Photograph: Henry Nicholls/Reuters

Tánaiste and Minister for Foreign Affairs Simon Coveney will brief the Cabinet on Tuesday on no-deal Brexit preparations and the political response of the EU to UK developments when Ministers meet at Government Buildings.

However, it is understood that in their first meeting since the August break, Mr Coveney will not discuss in detail any preparations for dealing with the Border in the event of no deal. Both Government Buildings and Brussels remain tightlipped on the subject, saying only that discussions were ongoing.

Ministers and officials continued to adopt a wait-and-see policy as they observed the turmoil in Westminster, with several senior sources sharing the view that no meaningful engagement will take place with the British government until after this week’s showdown in the British parliament, and possibly until after a general election.

Taoiseach Leo Varadkar said on Monday it was “a very volatile and dynamic situation” in the UK.

“Events are happening in the House of Commons this week and we’re going to have to see how they pan out,” he said.

“I could very easily make an initiative today and find out in 48 hours that it is totally out of date, so I think we have to allow things develop in Westminster.”

Mr Varadkar said he was “always willing to listen to any proposal that a British prime minister has”. However, any ideas floated by the British so far were not sufficient.

It is expected British prime minister Boris Johnson will travel to Dublin next week for talks with Mr Varadkar, and British and Irish officials are thought to be planning for the event, though confirmation is only likely after votes in Westminster this week, which could determine the future of Mr Johnson’s Brexit policy, and his government.

Speaking to journalists in Dublin, Mr Varadkar again defended the backstop – the guarantee of no hard border on the island of Ireland.

“The backstop is a means to an end,” he said.

“It is there to ensure that we continue to have frictionless trade North and South, that there is no physical infrastructure, no checks, no controls, no tariffs.

He said he would listen to any proposals that the British Prime Minister may have “to achieve that by an alternative means” and that was provided for in the joint political declaration.

“The difficulty is that anything we have seen so far when it comes to alternative arrangements do something very different,” he said.

Meanwhile, Mr Coveney played down suggestions in the British media the UK government is hoping to agree a last-minute deal at a European Council meeting of EU leaders in October.

Mr Coveney said it would be wrong to think that an 11th-hour deal could be reached on the withdrawal agreement at the October 17th meeting given the complexity of what is involved.

Asked if there was a particular date when the Irish Government would acknowledge the inevitability of a no-deal Brexit if no progress is made, Mr Coveney said the matter was being reviewed “on a daily basis”.