Concern as OPW rejects responsibility for ancient church in Dublin 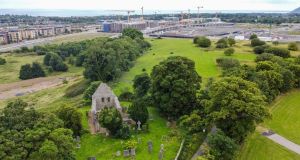 The future preservation of a pre-Anglo-Norman church and ancient stone crosses in south Dublin is causing concern after the new Minister of State with responsibility for the Office of Public Works (OPW), Patrick O’Donovan, said he couldn’t ascertain “ who, if anybody, is responsible for addressing heritage concerns in this area”.

Tully church and a number of ancient stone crosses, at Laughanstown, are within the Cherrywood strategic development zone (SDZ) in south Dublin.

The church is possibly of Danish design, with a chancel added to the nave during the 13th century. It has a rounded arch and two round-headed east windows. Nearby, at the side of the road, is a medieval stone cross which is understood to date from the 10th century; and in a field across the lane form the church there is another statue, thought to from the 13th century.

A plinth supporting the roadside cross bears a plaque to the memory of James F Grehan, who, it says, “saved this Celtic cross”. The plaque is dated 1897and carries a notice stating that it is preserved under the National Monuments Act, and the notice bears the logo of the OPW.

However Mr O’Donovan told the Dáil recently that the OPW had rejected responsibility for the artefacts. In response to a parliamentary question from Fianna Fáil TD in the Dún Laoghaire constituency Cormac Devlin, Mr O’Donovan said the Department of Culture, Heritage and the Gaeltacht previously “had responsibility for addressing the protection of Ireland’s cultural assets”.

But he added “the department’s National Monuments Service has been unclear, however, in recent days about its specific roles and powers at Cherrywood and refused last week to take this parliamentary question from us”.

“I have not been able to find out who, if anybody, is responsible for addressing heritage concerns in this area,” he said.

He also read aloud advice from his civil servant: “I suggest in these circumstances that the Minister would be circumspect about who exactly has responsibility for heritage protection.”

Under plans for the Cherrywood SDZ, Tully church and the stone crosses would become a focal point for a new park. Development of the SDZ was halted due to the 2008 economic crash, with work resuming in recent years. The Laughanstown Luas stop is about 600m from the church.

Mr O’Donovan said the OPW had a list of some 700 sites across the State for which it was responsible, but Tully church and the stone crosses were not among those listed. Mr O’Donovan said the OPW’s heritage services had not been “directly involved or consulted” in the creation of the Cherrywood SDZ and was “not responsible at a national level for the protection of heritage, generally”.

Mr Devlin told The Irish Times he was very concerned for the future protection of the complex of national monuments. He said it appeared, at least from what he could glean, that the OPW was indeed responsible for the church, while Dún Laoghaire-Rathdown County Council was responsible for the graveyard.

He said he thought the national monuments section of the Department of of Culture, Heritage and the Gaeltacht was responsible for the care of the stone statues, but reorganisation of the department by the new Government had made the situation opaque.

He said the county council was working actively with the developers of the SDZ on the preservation of the graveyard.

Liz Pilkington of Cabinteely Tidy Towns said her committee was concerned for the future protection of both the crosses and the church as well as some grave slabs which appeared to be Hiberno-Norse. She said the crosses should be brought to an indoor site in Cabinteely, while the committee would also like to know who would be responsible for the protection of the church from decay or graffiti and vandalism in the future.