Coats left for homeless on Ha’penny bridge removed by council 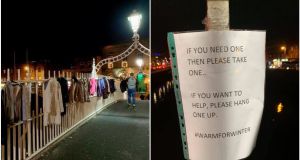 #WarmforWinter: The coats on Ha’penny bridge in Dublin have been taken down by Dublin City Council.

Dublin City Council has defended its decision to remove a number of coats which had been left on Ha’penny bridge as part of a charitable initiative.

The coats, which were part of the #WarmforWinter initiative, started appearing a couple of weeks ago after a sign was placed on the bridge inviting people to leave unwanted coats free of charge for anyone who may need them.

In a statement, the council said the coats would be taken down for health and safety reasons. It also said the coats reduced the flow of traffic and caused congestion on the bridge.

The council urged people to donate their unwanted coats to charities and confirmed the coats would be distributed through the council’s homeless services.

People have been leaving coats on the ha’penny bridge for the homeless, this morning myself and hundreds of other horrified onlookers watched as DCC took them down 😡 Happy Christmas lads the government need to change this is disgraceful pic.twitter.com/aNaO0nejGs

“Dublin City Council asks people not to hang clothes on the Ha’penny Bridge for health & safety reasons – it reduces pedestrian flows & causes congestion on bridge.Please consider giving them to charity shops. Items collected by DCC will be redistributed via our homeless services.”

The move has proven deeply unpopular on Twitter with some people claiming the council was more concerned about Dublin’s image than health and safety.

One person on Twitter said, “It seems a lot more likely that you did this because the jackets don’t look visually pleasing on the bridge and you can’t for even one second see past the tourists that visit Dublin, to the homeless people that live there.”

Another Twitter user asked how the council could continue to “misread public sentiment”.

A video on Twitter showed a Dublin City Council official removing the coats this weekend.

The number of homeless people in Ireland reached 10,514 in October.