Man (30s) dies in Co Kildare after being hit by car

Pedestrian was fatally injured on Saturday night in the townland of Greenhills, Kilcullen 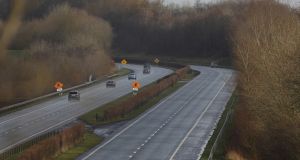 The scene where a man in his 30s died after being struck by a car in Kilcullen, Co Kildare. Photograph: Gareth Chaney/Collins

Gardaí in Co Kildare are investigating the death of a pedestrian who was struck by a car late on Saturday night in the townland of Greenhills, Kilcullen.

The man, aged in his mid 30s, was pronounced dead at scene and his body has been removed to the mortuary in Naas General Hospital. The male driver of the car, aged in his early 20s, was uninjured.

Garda forensic collision investigators closed the M9 southbound between junction 1 and junction 2 to allow for examination of the scene, and local diversions were put in place on Sunday morning.

Gardaí are appealing to any motorists who may have travelled on the M9 southbound between junction 1 and junction 2 prior to the collision or who may have witnessed it to contact them as Naas Garda Station on (045) 884300 or the Garda Confidential Line 1800 666 111.