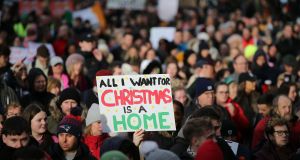 People take part in a protest over the homelessness crisis in Dublin. Photograph: Nick Bradshaw

Fianna Fáil TD John McGuinness has said he will vote against the Government if a motion of no confidence is brought forward in the new year.

The Carlow-Kilkenny TD took a swipe at his own party over its approach in the vote of no confidence on Tuesday in Minister for Housing Eoghan Murphy.

The Government survived by 56 votes to 53 while 35 Fianna Fáil TDs, who were present in the chamber, abstained as part of their confidence and supply arrangement in keeping the minority Government in office.

A general election automatically follows a Government defeat in a motion of no confidence debate.

Mr McGuinness was absent for that vote.

He was speaking during a debate on housing as an estimated 500 protesters demonstrated at both entrances to the Leinster House on Kildare Street and Merrion Square.

He told the Dáil that “on the vote of confidence - yes - Fianna Fáil sat on their hands and did the same thing with Simon Harris” in reference to the vote of no confidence in the Minister for Health, which the Government survived in February.

But he said “the fact of the matter is that the Minister is acting at one with the Government, with the Cabinet”.

And he added: “If someone puts down a vote of no confidence in the Government I’ll vote for it because that’s the way it should be.

“And I honestly hope that this supply and confidence arrangement, which is a farce and accommodating all this stuff comes to an end quickly in the near year so that at least the electorate can have their say.”

He claimed that thousands of people were being evicted from their homes, that the Government was responsible for the entry of vulture funds into the market and that it was not building social housing, a view echoed by a number of TDs.

Rise TD Paul Murphy warned the Dáil that a housing demonstration by protesters t at the Merrion Square side of Leinster House reminded him of the early stages of the anti-water charges protest movement.

“And I think people’s anger is now overflowing at the lack of action by this Government and the reality of policy that serve the interests of landlords and developers.”

He read out a number of demands from the protesters including that the crisis be declared a national emergency and treated as such by the Government.

But in a staunch defence of housing policy, Minister of State Damien English rejected claims that his party was against social housing.

“If we had built social housing every year since then we wouldn’t be this stage, now,” he insisted.

The Government aimed to have workers in the sector who would know “they’ll have a safe job for a long period of time and not boom and bust” with 90,000 homes one year and none the next.

And he hit out at Mr McGuinness’s claims about Fine Gael bringing vulture funds to Ireland.

He said that when they got into office they were “handed over” a construction crisis with 3,000 unfinished estates, 16 per cent unemployment and a collapsed industry and “that’s what led on to vulture funds”.