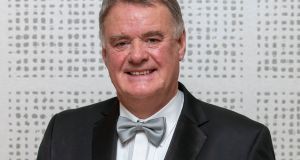 A Co Tipperary dentist has been honoured at an awards ceremony for helping a patient to escape an abusive relationship after treating her broken tooth.

Pádraig O’Reachtagáin was named dentist of the year for the “compassionate treatment” he provided to the woman who was injured in an incident of domestic violence.

The woman, who wished to remain anonymous, said Dr O’Reachtagáin, not only repaired her broken tooth, he also showed her and her children a way out of a violent situation, according to the organisers of the award.

“Pádraig opened up his practice on a Saturday morning just to treat me at much expense to himself I am sure. He was caring, compassionate and also advised me on the avenues I could go down to get myself and my children into a much safer environment,” she said.

“I can’t express how thankful I am; he not only repaired my tooth but showed me a way to get out of a violent situation – myself and my children are now safe due to his care and understanding.”

Nominators receive a prize if the dentist they nominate wins. In this case, the woman - who travelled a considerable distance to Roscrea to receive treatment from Dr O’Reachtagáin - said she wanted her €1,500 prize to go to Women’s Aid. Award sponsors Colgate matched the donation.

Dr O’Reachtagáin said he worked in East London in the 1980s “close to a refuge for battered wives, as victims of domestic violence were known then.

“From treating those women, I learned that domestic abuse and violence was a lot more prevalent than we all like to think. I also learned that it was an issue which while shrouded in secrecy affected women from all walks of life.”

The president of the Irish Dental Association, Prof Leo Stassen praised Dr O’Reachtagáin for his “tremendous sensitivity and understanding” in the case.

“After ensuring the patient had a secure and caring environment, he went on to provide her with excellent treatment and wise counsel. This enabled the mum and her children to escape from a dangerous situation. Her story — and indeed her own generosity in donating her prize to Women’s Aid — will undoubtedly inspire others who find themselves in similar situations.”

The awards were attended by more than 360 people at the Clayton Hotel, Burlington Road on Saturday night.