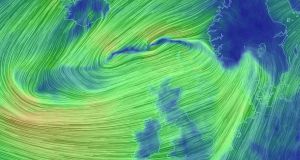 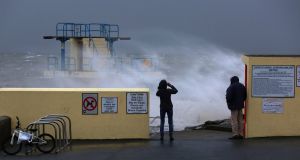 Walkers look out to sea at Blackrock in Salthill, Galway on Sunday as Storm Atiyah arrived. Photograph: Joe O’Shaughnessy

Storm Atiyah has made landfall in Ireland bringing high winds and rough seas along the west coast.

Waves reaching heights of eight metres in Atlantic coastal areas are expected as Storm Atiyah makes its way across the country on Sunday evening.

Wind speeds in excess of 130 km/h will be experienced in Co Kerry which was the subject of a rare red weather alert. A red alert signals weather that is a potentially life-threatening to those caught out in it. The red alert has now been lifted and Kerry is now under an orange alert along with Donegal, Galway, Leitrim, Mayo, Sligo, Clare, Cork, and Limerick

A wind speed of 111 km/h was reached at Valentia in Co Kerry on Sunday afternoon just after the red alert came into force. It is due to last until 9pm on Sunday evening.

A status red gale warning was issued at 1pm on Sunday for all Irish coastal waters with violent storm force 11 winds anticipated.

More than 35 fishing vessels have taken shelter in Bantry Bay in anticipation of the storm.

The M6 buoy positioned 500 kilometres off the coast of Ireland showed wave heights of more than 14 metres at 4pm on Sunday indicating that Storm Atiyah is creating very stormy seas.

He added, though, that the storm coincides with low tide so flooding will not be as bad as it would be if there was a high tide.

All 26 counties are the subject of weather warnings. A status orange weather alert is in place for the counties of Donegal, Galway, Leitrim, Mayo, Sligo, Clare, Cork, Kerry and Limerick from 1pm on Sunday until 6am on Monday morning.

All of the west coast is at risk of very high seas with the peak danger expected to be at 10pm on Sunday night.

A status yellow weather warning is in place for the rest of the country with the east coast expected to experience the windiest weather between 9pm and 3am.

Monday’s commuters will have to deal with high winds on the east coast as the remnants of the storm pass over the country. After that the winds will drop back fairly quickly.

Meanwhile a total of nine flights due to arrive into Cork Airport on Sunday were cancelled, including four flights from Manchester and two from London Heathrow as well as flights from Birmingham, Glasgow and Edinburgh

A number of other flights had to be diverted including one from Malta and one from London Gatwick which were both diverted to Dublin while a flight from Budapest and another from London Luton were diverted to Shannon, all due to strong winds at the airport.

Irish Rail also advised customers that travel times on its service in the south west including services between Mallow and Cork, Mallow to Tralee, Cork to Cobh and Cork to Midleton would take longer than usual as trains were operating at a reduced maximum speed of 50mph/80kph.

Cork County Council suspended the Dursey Cable Car serving Dursey Island at the tip of the Beara Peninsula while Cork County Counciil staff were out clearing fallen trees on some minor roads in both North and West Cork.

ESB Networks reported a number out of outages in Cork and Kerry with strong winds bring down trees and branches on power lines leading to small numbers of homeowners being left without power.

Among the worst affected areas in Co Cork were Castleview in Little Island where 316 homes were without power while in Glengarriff some 246 houses were left without power and in Mallow some 131 homes suffered an outage.

There were smaller outages in a number of other areas including Lee Bridge near Ballyvourney and Whitechurch in Mid-Cork where there were also outages scattered across North Cork including at Kanturk, Buttevant and Cloonlough near Mitchelstown.

In Kerry, homeowners near Caherdaniel in South Kerry and Feoghanagh in West Kerry as well in Milltown in Mid-Kerry all experienced outages with ESB Networks expressing hope that it would be able to restore power in most areas by later tonight.

Gardaí appealed to the public to be extra cautious for the duration of the weather warning.

“Cyclists, motorcyclists and pedestrians should be aware of the danger posed by high winds as they are particularly vulnerable. Drivers of high sided vehicles should take all necessary precautions and pay attention to the warnings.

“We ask people living near coastal, cliff and waterway areas, particularly those with children, to be extra cautious considering the gusty winds forecast,” An Garda Síochána said in a statement.

A number of public parks were closed on Sunday, with the National Parks and Wildlife Service (NPWS) saying it was advising members of the public not to visit any national parks, national monuments or nature reserves in areas covered by the status orange weather warning.

The service said the following parks and reserves were closed on Sunday:

Dublin Zoo has also cancelled its Wild Lights show on Sunday due to the forecast.

The National Directorate for Fire and Emergency Management (NDFEM) Severe Weather Team in the Department of Housing, Planning and Local Government said it has been monitoring Storm Atiyah with Met Éireann, as it moves towards Ireland.

“Appropriate response and local co-ordination arrangements are in place,” it said in a statement on Saturday.

ESB Networks are on standby to respond to any damage to the supply network arising from Storm Atiyah, it said. The team also contacted the Department of Transport, Tourism and Sport which “will relay the current warnings to the transport operators”.

Met Éireann forecaster Elizabeth Coleman said this weekend’s storm was typical for this time of year due to the current “mobile Atlantic regime”. She added that milder temperatures were set to continue in the coming days.

“We’re at that period when it’s sometimes milder at night time than it is during the day,” she said. Temperatures will range between 6-8 degrees in the coming days, rising to 10 degrees at night.

Once Storm Atiyah clears, Monday is expected to be a clear and dry day. However, milder air will bring rainfall on Tuesday and more unsettled weather. Temperatures are expected to become colder on Wednesday and Thursday.

Named by Met Éireann, Atiyah (pronounced “Ah-tee-ya”) comes from a list compiled by the Irish forecaster and the UK Met Office to cover the 2019-2020 storm season.