Minister for Tourism said she had accepted Michael Cawley’s resignation 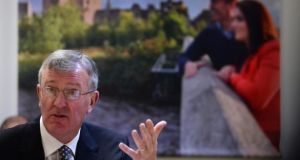 The chairman of Fáilte Ireland Michael Cawley has resigned from his position after it emerged he is currently on a family holiday in Italy.

In a statement today, Minister for Tourism Catherine Martin said she had accepted his resignation.

“Tourism and hospitality have suffered significant losses since the start of this pandemic, with the industry in the three midlands counties of Laois, Kildare and Offaly particularly affected at present,” she said.

“While Italy is on the green list, meaning that people who return from there do not have to restrict their movements, the Government has called on people to avoid all non-essential travel. Many of our citizens and residents have followed this guidance at some personal and financial cost to themselves.”

She said the Government and her Department in particular has encouraged people to holiday in Ireland this year, with the vast majority of people heeding that call.

She said Mr Cawley had served with “energy” over his time as chair and she thanked him for his service to the cause of tourism promotion in Ireland. “He recognises that solidarity with the industry is extremely important at this time, and I have accepted his resignation this afternoon because I believe his position was untenable,” she said.

Mr Cawley according to a report in this morning’s Irish Independent, is in Italy for a holiday. He told the paper it was a “family decision and a personal decision” to travel. He said he planned to take two holidays in Ireland this year, and that he had met family members who lived abroad on the Italian trip.

In a statement on Saturday afternoon Mr Cawley said it was with great regret that he had tendered his resignation.

He said: “It is with great regret that I have this morning tendered my resignation as Chairman of Fáilte Ireland to Minister for Media, Tourism, Arts, Culture, Sport and the Gaeltacht, Catherine Martin TD.

“As has been reported in the media this morning I am on a pre-arranged family holiday in Italy, which is on the Government green list. As I have no wish to allow this issue to become a distraction from the important work of Fáilte Ireland in rebuilding the Irish tourism industry, I have decided after six years in the position to step down. I fully support the Government’s policy on tourism and I will continue to help the industry emerge from its current difficulties. It has been a privilege to serve as chair of Fáilte Ireland and to have contributed to the massive growth which Irish tourism has enjoyed prior to this global pandemic”.

CEO of Fáilte Ireland Paul Kelly thanked Mr Cawley for his “strong chairmanship” and contribution to Fáilte Ireland and to the tourism industry since his appointment as chairman of the authority in 2014.

“Michael has been an invaluable support to the executive team at Fáilte Ireland. He has made a significant contribution to developing and growing the tourism sector in Ireland. On behalf of the executive team and staff I want to express my thanks to Michael and I wish him well in the future,” he said.

Sinn Féin’s spokeswoman on tourism Imelda Munster said the holiday was “a crass error of judgement”.

Senator Mark Wall, the Labour Party spokesman on tourism, said it was “unbelievable”. “I travelled into the town of Athy and other towns in south Kildare yesterday in the business of tourism, they’re on their knees.”

Fáilte Ireland has been the main State agency responsible for a months-long campaign to encourage people to take holidays at home in order to support the domestic tourism industry, which is uniquely exposed to the economic impact of the Covid-19 pandemic.

Italy is on the Government’s so-called “green list” of destinations, meaning normal precautions apply to travel there, with no period of restricted movement expected for those arriving into the State from there. However, the Department of Foreign Affairs continues to advise against non-essential travel overseas.

The issue also drew criticism from those in the hospitality trade. Adrian Cummins, the chief executive of the Restaurants Association of Ireland, said “leadership starts at the top and this is definitely poor judgement and shows how out of touch the chairman of Fáilte Ireland is at a moment in time when our tourism industry needs every support it can get.

“Restaurants and tourism businesses across the country are struggling to stay afloat, but when you see the chairman of the national tourism board not leading by example it’s shocking optics.”