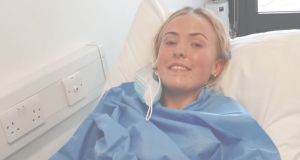 Safe and sound: Ellen Glynn is expected to be discharged from University Hospital Galway this weekend.

The families of the two cousins rescued on Galway Bay are to launch a fundraising drive to help the RNLI.

They want to give something back in recognition of the vast search which was launched to find Sara Feeney (23) and her 17-year old cousin Ellen Glynn, who were picked up after spending over 15 hours on their paddleboards overnight after being blown out to sea.

They had been blown almost 20 miles across the bay from where they entered the water in Furbo.

On Saturday President Michael D Higgins said he was just one among many who were absolutely delighted there was a happy outcome.

“Their families are people who have given a lot to their communities, and John Glynn (father of Ellen) has given an enormous amount of support to sport, and to soccer in particular,” he said.

He was “lost in admiration for the Oliver family” who he said represented generations of wisdom in relation to the sea.

“When opportunity allows, I look forward to paying tribute to Patrick and Morgan Oliver,” he said on Twitter.

A massive search involving three Coastguard helicopters, lifeboat crews from Galway, Doolin, Aran and Costelloe Bay, were joined by dozens of fishing boats, leisure craft and kayaks in the search for the missing women, while hundreds of people combed the shore in south Connemara, Galway and north Clare.

Sara was discharged from University College Hospital on Thursday evening while Ellen is expected to be discharged this weekend after being monitored for minor issues.

Their relieved families are anxious for life to return to normal as quickly as possible but are also keen to acknowledge the goodwill and effort they have received from so many people.

And they stressed they are anxious to help the rescue services in a meaningful way, mindful of the fact that for a lot of families these sort of searches end in tragedy and heartbreak.

Sara is recovering quietly at home in Knocknacarra, while a short distance away Deirdre and Johnny Glynn and their other three daughters Hannah, Clara and Alice, were busy on Saturday afternoon preparing for the return home of their eldest child.

A string of welcome home balloons are hanging inside the porch of the house at Binn Bhán for when Ellen is discharged and mum Deirdre said that while it will be a relief for some degree of normality to return, they are anxious to assist the emergency services who came to their aid.

“It is so hard when you are in the middle of it to think what to do, but a neighbour had the great idea that we should do a GoFundMe page for the RNLI, so we are going to do that as soon as possible and strike while the iron is hot,” she said.

“We are just so grateful to everyone who has helped and we are aware that for a lot of families they don’t have the outcome that we have had. We want to express our gratitude in a meaningful way and do what we can.”

Her husband Johnny, the former Galway United captain who scored the only goal which won them the 1991 FAI Cup, said that he met the fishermen for the first time on Friday evening who had rescued them.

Holding one of the woollen hats which Patrick and Morgan Oliver had put on each of the young women when they found them, he said they would be grateful to everyone who searched for them and, of course, to the Olivers for finding them. The hats have logos on them urging everyone to wear a lifejacket.

“I called down to the fisherman last night. I had spoken to Patrick on the phone for about ten minutes and I just wanted to meet them and thank them”.

Earlier it emerged the cousins had only gone out to sea in Furbo because their usual location was closed off due to Covid-19 restrictions.

They usually went paddle boarding at the sheltered Rusheen Bay or Silverstrand, both of which are close to their homes in Knocknacarra.

But massive crowds over last weekend, especially at Silverstrand, led to the road to the beach being closed and they opted to head further out the Connemara road to Furbo beach six kilometres away.

Ellen’s dad said it was the first time the pair had paddle boarded from Furbo but that both were experienced water users.

And Ellen said it was probably the first time she had headed out on the paddle board without having her mobile phone with her wrapped in plastic.

“If I had my phone I could have called and just said ‘this is exactly where we are’. But I didn’t have it with me,” she said.

But she said they never panicked. They tied their boards together and while the initial arrival of a helicopter and a couple of boats failed to spot them, they did not panic.

“We weren’t really scared. I think that we were quite sure that we were going to be found. The only thing I was worried was how cold we were. We were shaking like leaves and frozen and everything.

“The wind out at sea was just getting heavier. There was thunder and lightning and heavy rain and stuff so we were absolutely frozen,” she told RTÉ on Friday.

They dosed off several times after nightfall but kept each other’s spirits up, firmly believing it was only a matter of time before somebody came to rescue them.

“We were trying to stay awake, but we’d fall asleep for a few seconds. It started to get bright, the sun came out and it got a bit brighter and we could see where we were”.

They were so relieved to see the Olivers coming in their boat to rescue them that in the excitement Ellen ended up knocking Sara into the water as they tried to board the Johnny O, the seven-metre potting boat belonging to the father and son team who came to their aid.

“I felt when I was in the water on the paddle board I felt completely fine. I stood up to get on the boat and my legs collapsed from under me, I knocked Sara off her board as well! Just complete shock, I hadn’t used my legs in so long. Then we were very shaky getting on to the boat but they wrapped us up and tucked us down in a corner and gave us drinks and everything. They were really good to us. We are so grateful to them,” added Ellen.

Sara, an only child, has just completed her psychology degree at NUI Galway, while Ellen is heading into fifth year at Colaiste Iognaid in the city.