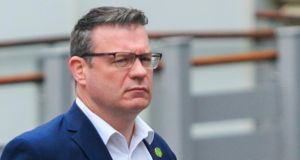 Labour Party leader Alan Kelly: “It is clear from these figures that the reopening plan for non-Covid healthcare is inadequate and needs to be significantly beefed-up.” Photograph: Gareth Chaney/Collins

Almost 50,000 additional people are waiting for an outpatient appointment since the start of the year, largely as a result of delays caused by the Covid-19 pandemic.

The number of outpatients on the waiting list has surpassed the 600,000 mark for the first time, the latest figures from the National Treatment Purchase Fund (NTPF) show.

Some 233,445 of these patients have been waiting more than 12 months for their appointment.

The stark figures prompted Labour to warn last night that more patients would end up dying of causes other than Covid-19 if the Government did not take action to address the “tsunami” of non-coronavirus healthcare needs.

“Never before in the history of the State has there been so many people on hospital waiting lists and unless the Minister [for Health Stephen Donnelly] takes action, this will spiral further out of control. It is also clear from these figures that the reopening plan for non-Covid healthcare is inadequate and needs to be significantly beefed-up,” Labour leader Alan Kelly said.

The inpatient waiting list has also grown substantially since the start of the year, despite heavy investment by the NTPF in privately sourced procedures, though July’s figures are slightly down on the previous month.

A total of 819,037 patients are on some form of waiting list monitored by the fund.

The Covid-19 pandemic forced the cancellation of all non-urgent hospital work in the spring and, although activities have resumed in many parts of the health service, capacity is reduced to about 80 per cent or less due to the requirement for infection control.

The Irish Hospital Consultants’ Association highlighted the impact on individual specialities, estimating a 25 per cent rise in general surgery lists since the start of the year, 12.4 per cent in orthopaedics and 10.4 per cent in urology.

Another 67 new cases of Covid-19, and no new deaths, were reported by the National Public Health Emergency Team on Friday.

Eighteen of the new cases are in Dublin, 17 are in Kildare, nine in Clare and five in Limerick. The remaining cases were reported in Carlow, Cork, Donegal, Laois, Longford, Offaly, Tipperary, Wexford and Wicklow.

Sixteen of the cases have been identified as involving community transmission, meaning the cause of the infection is not known at this point.

There has also been an increase in the number of contacts per confirmed case to six, according to acting chief medical officer Dr Ronan Glynn, who urged people to keep their social contacts low in order to limit the spread of the disease.

In Kilkenny, a member of staff at St Luke’s Hospital is recovering at home after contracting the virus. A restaurant in the city closed when a worker tested positive.

Northern Ireland recorded another 74 cases of the virus, while the death of a 32-year-old woman was reported in Co Antrim.

Two of the four midlands meat-processing plants hit by Covid-19 outbreaks are reopening. Irish Dog Foods, which had 53 cases, and Carroll Cuisine, which had nine, said this would happen on a phased basis.