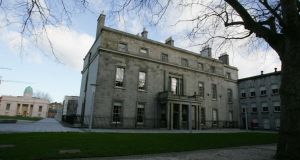 A Department of Education spokesman said ‘current policy on school uniforms remains a matter for the board of management of each individual school’. Photograph: Bryan O’Brien

Schools have been urged not to impose financial pressure on families by directing parents to provide clean sets of school uniforms each day.

Some parents have expressed concern about recent communications from certain schools urging that freshly-laundered uniforms or school-branded tracksuits be worn every day in order to help limit the spread of Covid-19.

There is no reference in public-health guidance to daily washing of school uniforms or any clothes, and acting chief medical officer Dr Ronan Glynn has confirmed no such advice has been issued by health authorities.

A Department of Education spokesman said “current policy on school uniforms remains a matter for the board of management of each individual school”.

One mother, whose twins attend a Co Limerick primary school, said she received a note last week “encouraging” parents to have two to three crested tracksuits, “one should be washed and dried every day”.

The mother said the crested tracksuits cost €35-€40 each. “That means, having twins, I may have to buy six tracksuits which are also very cumbersome to wash.”

Jean Leonard, principal of the Assumption Junior School in Walkinstown, Dublin, said she was changing policy so that all pupils would wear tracksuits, whereas until now those in first and second class wore a uniform.

“We are doing this because they are easier to wash,” she said.

The principal said she was not asking parents to launder the tracksuits every day because it would be difficult for some, such as those living in accommodation for homeless who had no laundry facilities easily available.

“I do think most parents will choose to do it and would like other parents to, but we are conscious there has not been a directive from the department on this.”

Paul Rolston of the National Parents’ Council Post-Primary warned any new requirements, such as changing uniforms on a regular basis or buying additional supplies, could put parents under financial pressure. “There are issues to do with dry clean-only uniforms, cost consideration and hassle,” he said.

Páiric Clerkin, chief executive of the Irish Primary Principals’ Network, said: “At primary, a lot of schools have tracksuits and uniforms, so there could be flexibility there. We expect schools and boards of management will be pragmatic, support families and come up with flexible approaches which put families at ease.”