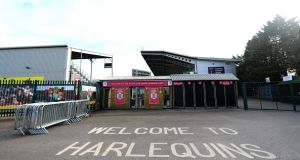 Harlequins v Sale will be the first game in the English Premiership for 159 days. File photograph: Getty Images

Premiership players will be forbidden from hugging and celebrating tries within two metres of each other as part of a number of strict measures introduced for the English league’s long-awaited restart when Harlequins host Sale at the Stoop on Friday night.

Despite the scrums, rucking and mauling, players will also be prohibited from shaking hands, high-fiving and kissing due to protocols designed to ensure social distancing is observed wherever possible. Sharing equipment is also not allowed and the coin tosses will take place outdoors – most likely on the pitch – and at the water break midway through each half, players will be assigned their own named bottles.

All squads have also been warned over their use of bad language as the first Premiership action since March will take place behind closed doors and players will be easily heard on TV. There will also be a minute’s silence held before each match to honour the English NHS, whose logo will be emblazoned on match officials’ kits.

In the most recent round of Covid-19 testing, one player – from Northampton – produced a positive result but events in France, where Stade Français have had an outbreak of 25, throwing their participation in the start of the new Top 14 season into doubt, have demonstrated the dangers of a surge in cases. Premiership players have been tested twice this week and the results of the second round will be made public on Friday.

If clubs are unable to fulfil fixtures due to an outbreak, the opposition will be awarded a 20-0 bonus-point victory. Teams could have points deducted in the event of a breach of their social bubble on away trips.

Sale’s trip to Harlequins marks the first Premiership match for 159 days and the length of the delay means clubs face midweek fixtures and the gruelling schedule of seven matches in 28 days. Midweek matches make the dangers of an outbreak in a squad all the more acute so while players will be scrummaging, rucking and mauling throughout, social distancing measures remain in place.

“Premier League football has done a fantastic job getting back with such a short timescale and we’ve rowed on the back of that,” said the Sale director of rugby, Steve Diamond. “The difference is the contact. There was some stat there is under two minutes of skin contact in professional football. I think there is 47 minutes of skin contact in rugby. Then you have the scrums and all the rest of it.”

Diamond has backed Manu Tuilagi to make an immediate impact after throwing him straight into the starting lineup at the Stoop. Tuilagi completed his move to the Sharks last month after his controversial exit from Leicester .

“[MANU] is the ultimate pro,” said Diamond. “He turned up for training in incredible condition. We don’t have many moves, to be fair, but the ones we do have he learned very quickly. He’s been error-free through the last three weeks of training and he’s ready to go.

“We’re leading the try-scorers in the competition. That suggests we play a bit and the only addition to the team is Manu. We’re going to run over people. The basis of our game is momentum and people like Manu give you momentum.” - Guardian