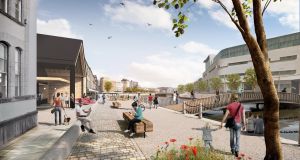 Campaigners against the proposed €140 million OPW flood protection scheme for Cork city say they will lobby politicians to look at alternatives after holding an international design competition.

The competition asked people to come up plans on how the city might capitalise on its river features.

The Save Cork City group organised the Morrison’s Island International Design Competition last year as a means of stimulating debate and discussion about how Cork might develop its quays.

The competition attracted some 55 entries from Ireland and abroad.

Architect Sean Antoin O Muiri of the Save Cork City group said they hoped the winning design by London based architects, Henry Harker of HH and Dubliner Francis Keane, as well as the other entries would get people to look at how Cork’s quaysides could be developed to their full potential.

“People are fundamentally opposed to the current OPW plan so it’s really a case of going back to the politicians and working with the politicians to get the best plan for Cork,” Mr O’Muiri said at a lecture at the weekend where the campaign group introduced the top three entries to the public.

“And the reason for holding the international competition was to source the best plan, get a good jury to interrogate the issue at hand and look at it to achieve the best plan for Cork for the future so the historic quays can be developed in a way that ensures they remain accessible to the people.”

Mr O Muiri said the Save Cork City group was opposed to the OPW plan as it involves the construction of over 5km of concrete walls in the city centre, which would reduce access to both the north and south channels of the Lee. He said this would be a mistake for Cork.

The winning design by Mr Harker and Mr Keane involves the removal of all traffic from both Morrison’s Quay and Fr Matthew Quay on Morrison’s Island, and the construction of two arched wooden footbridges over the south channel of the Lee to both Union Quay and George’s Quay.

The removal of traffic and parking from both quays allowed the area to be opened up to the river, and the design involves the positioning of a protective wall back from the quayside beside the footpath to protect the buildings from flooding while allowing access from the quays to the river.

Mr Keane explained such a design would allow access to the historic quays of Cork as has happened in Paris where there are open promenades beside the Seine, which floods during heavy rains but are otherwise open for people as riverside amenity areas.

“You have these lower walkways beside the Seine in Paris and our design is similar- the promenade would be completely floodable in that 1 per cent instance where you have high tides and heavy rains but the rest of the time it’s given over to pedestrians and others who can look out on the river,” he said.

Mr Harker added: “At the same time, people can still access the buildings during flood events because we have this protective wall set back by the footpath so it prevents the footpath and the buildings from flooding if there are high tides or heavy rains.”

Mr O Muiri said the winning design along with the entry from Porocity and the entry by GMKP Architects, which were second and third, showed there were alternatives to the OPW plan when it came to resolving Cork’s flooding problems and these included ones that did not damage Cork’s historic quays.