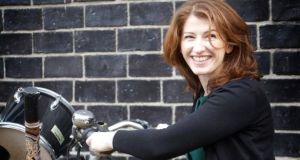 Last weekend’s Grammy Awards in New York had an ever-so-slightly greenish tinge after a Canadian soprano and a Dutch-based musical collective set up by a woman from Cork walked off with the gong for the Best Classical Solo Vocal Album.

Soprano/conductor Barbara Hannigan and the Orchestra Ludwig from the Netherlands were so surprised when their names were read out at the glitzy ceremony that no-one involved was there to accept the prize, said Irish oboist and lynchpin of the orchestra Aisling Casey.

Ms Casey has played and record with violin virtuoso Nigel Kennedy and been elevated to principal oboe with the Netherlands Radio Philharmonic Orchestra. She is also the co-founder of the St Patrick’s Eve music festival in Amsterdam and can now add Grammy-winner to her CV.

She and six colleagues set up the Ludwig Orchestra in response to “massive cuts” announced to arts funding in Holland. “We thought it important to rethink how classical music is presented in Holland (to) ensure that not less but more music and beauty remained in the world,” she siad.

“We formed a partnership with soprano Barbara Hannigan right at the start of Ludwig. (She) was just starting out in her conducting career. The special thing about Barbara is that she doesn’t just sing or conduct, but does both which is unknown in the classical world, leading to incredible performances,” she said.

This Grammy-winning recording is the orchestra’s first recording. “Winning was a bit of a surprise although it wasn’t a complete one as we did know we had been nominated,” she said. “It would have been nice to go to the awards but we are performing artists and we couldn’t just drop everything to go.”

She said she was still unclear if the Grammy would make much of a difference in the long term to the artists involved. “I am not sure what difference it will make but for a little-known and young group it is a great acknowledgement.”

She said music and the effect on the brain is an important part of the organisation and her collective has also worked on developing projects around dementia and pain relief and run symposiums bringing together leading scientists and musicians.