Cork council calls for halt to extraditions to Northern Ireland

Independent councillor criticises use of strip searching at Maghaberry 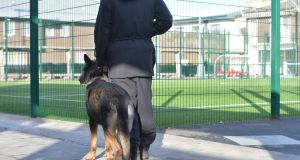 A prison Officer and a working dog inside Maghaberry Prison near Lisburn File photograph: Alan Betson

Cork County Council has called on the Government not to allow the extradition of any Irish citizen to Northern Ireland or any part of the UK amid fears that Britain will not adhere to European Convention on Human Rights following Brexit.

Councillors backed a motion from Cobh based Independent councillor Kieran McCarthy who expressed concern that Britain was engaging in cruel and degrading treatment of political prisoners in Maghaberry Prison near Lisburn.

Cllr McCarthy said prisoners are being subjected to full body searches and he alleged that they are being physically beaten if they resist such full body searches, all of which could be avoided if prison staff in Maghaberry used the same new technology currently in use in Portlaoise.

According to an Irish Times report last year, some 27 dissident republicans, drawn from the New IRA, Oglaigh na hEireann and the Continuity IRA, and 16 loyalist paramilitaries were being held at separate high security blocks at Maghaberry Prison which has a total prison population of over 900.

Dissident republicans have claimed responsibility for attacks which have claimed the lives of two prison officers working at Maghaberry, father of two David Black (52) who was shot dead in 2012 and father of three, Adrian Ismay (52) who was fatally injured in a bomb attack in 2016

A former member of Sinn Féin, Cllr McCarthy prefaced his remarks that his motion was not an expression of support or approval for any one or group involved in armed conflict but was instead concerned simply with human rights and human dignity.

“The matter of full body strip searching and physical beatings in the north of Ireland is one all democrats and people who worked to bring peace to this island should be concerned with. The fact these practices are continuing in Maghaberry post-Good Friday Agreement is of particular concern.”

“It is all the more concerning given that the all-party Oireachtas Committee on the Implementation of the Good Friday Agreement has noted that there is no justification for the continued use of full body strip-searching in Maghaberry Prison as modern technology has superseded its need.”

Cllr McCarthy said that the British government and its security and penal institutions have a long history of human rights abuses in Ireland and Britain had previously been brought before the European Court of Human Rights over its conduct in Northern Ireland.

“As matters stand, Britain is again in breach of the European Convention on Human Rights because of the practice of beating prisoners while they are forced to endure full body strip searches. What no one can guarantee at this time is the UK government’s commitments to the ECHR post-Brexit.”

Cllr McCarthy said that the Taoiseach, Leo Varadkar and the Government should raise the human rights issue as part of the Brexit negotiations with the UK government as he called on fellow councillors to support his motion on stopping extradition.

Cllr McCarthy’s motion was seconded by fellow Independent, Cllr Noel Colllins from Midleton and following a brief debate, it was accepted and passed without any vote which was welcomed by Cllr McCarthy who said it was important to protect human rights and human dignity.