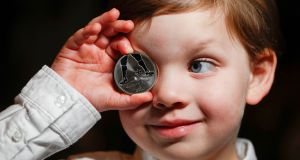 The Central Bank is to crack down on so-called commemorative coins. File photograph: Conor McCabe Photography

Fears that Irish consumers could be short-changed when buying so-called commemorative coins has prompted the Central Bank to crack down on the trade.

While the bank has the sole authority to issue special euro coins to mark major events, other enterprises have been cashing in on a centenary of anniversaries by selling pieces of metal marking events and characters connected to the foundation of the State.

A key issue that the Central Bank has identified is the use of the word “coin” and it believes that all such materials should rightfully be described as medals in order to remove any confusion.

The price of commemorative pieces can range from less than €50 to more than €2,000 depending on the material they are made with.

After concerns were expressed in the Dáil by Sinn Féin’s finance spokesman Pearse Doherty, the Minister for Finance Paschal Donohoe confirmed that only the Central Bank can mint legal tender to mark historic events.

Mr Doherty submitted a parliamentary question asking the Minister to comment on private companies which, he said, were “implying that they are selling officially sanctioned commemorative coins”.

In response, Mr Donohoe confirmed that the Central Bank was aware of private companies offering “coin-like objects and medals for sale” and was taking an active interest in the trade. He said concern had been expressed over how some companies have been representing some of their products.

The Central Bank confirmed that it alone acts as an agent for the Minister for Finance in issuing all legal Irish coin, both circulating coins and commemorative coins and it stressed that it was “the sole body with the statutory authority to issue commemorative coin as legal tender in Ireland.

A spokeswoman said the bank was aware there are “private companies within the market that offer coin and medals for sale” and she said officials from the bank had expressed concern “to some of these companies about how they represent some of their products”.

She also said the Central Bank would be raising the issue with the Advertising Standards Authority for Ireland and the Competition and Consumer Protection Commission.

Mr Doherty said he was “glad to see the Central Bank shares my concerns about how some of these products are presented and marketed. I have no doubt they are intentionally trying to present their products as somehow official”.