Prescriptions for powerful painkillers increased by over 1,000% in the last decade 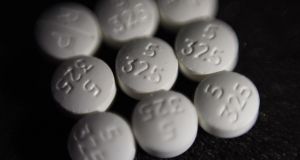 The “fractured and broken” health care system is the reason for the 1,000 per cent increase in the prescribing of opioids in the last decade, the National association of General Practitioners has said.

Dr Emmet Kerin, president of the association, there had been a stark escalation in the prescribing of very addictive drugs.

He said this has led to dependency issues, difficulties in functionality and a blunting of cognitive abilities.

Dr Kerin told RTÉ’s Morning Ireland the increase was also a symptom of the failure of the health system.

The use of prescription benzodiazepines, opioids and similar drugs has soared in Ireland in the last decade.

The Sunday Business Post reported this week on prescriptions of pregablin, a potent anti-anxiety drug, have increased by more than 1,000 per cent among medical card holders since 2006.

Use of the opioid Oxycodone- brand name Oxycontin- has also sky-rocketed. The drug is largely responsible for an addiction epidemic in the United States which claims 174 lives a day.

Prescriptions of the drug fentanyl, an opioid stronger than heroin, doubled during the same period. The use of sleeping tablets such as Zopiclone has also increased massively.

Dr Kerin said that in the 10 years from 2006 to 2016, which saw a massive increase in the use of opioids, the number of medical cards increased 38 per cent. At the same time health funding decreased by 40 per cent.

These factors are driving down the amount of time doctors can spend with patients, Dr Kerin said.

Another issue is prescribing habits, he claimed. The majority of these drugs are being prescribed in community psychiatry with GPs then having to transfer the script for a consultant.

The lack of access to community counselling means that people are being put on medication to handle anxiety, Dr Kerin said.