Party’s female politicians tend to back reform, but rural representatives have concerns 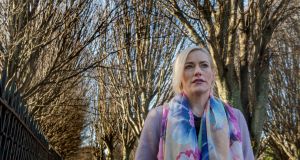 Emma Blain (37), an FG councillor in Dún Laoghaire-Rathdown: ‘I am pro-choice and I am delighted that people of my generation are getting the chance to vote.’ Photograph: Brenda Fitzsimons

For weeks, even months, in Leinster House, the abortion issue has dominated discussion within Fine Gael so much that little else has got a look-in.

But if you step outside its ornate wrought-iron gates and travel south to liberal Dún Laoghaire-Rathdown, or to the mixed political terrain of Co Wicklow and across the country to conservative counties such as Sligo and Leitrim, is it the same? Are councillors and party members quite as engaged as their TDs and Senators?

“People have not really engaged on the topic. It’s still local politics with us, like dog poo, and poor train services,” says Derek Mitchell, a councillor in Greystones, Co Wicklow, not quite tongue-in-cheek.

“It’s very far down the agenda,” says John McCartin, a councillor from Newtowngore, Co Leitrim, referring to the abortion referendum. “People have not been bringing it up. In any instance we feel disenfranchised. We have had zero input, we still do not know exactly what the question is.

“I am not sandbagging, or kicking to touch, but it’s not a big issue yet.”

Fine Gael regional organiser Enda McGloin, from Drumshanbo, agrees: “There is very little discussion at the moment. The view I have is that’s it’s mute. People are silent.”

That sentiment is widespread. If the debate is at full-throttle in the Dáil and Seanad, it seems that, outside the beltway, the ignition key has hardly been turned.

The Irish Times spoke to dozens of Fine Gael activists, councillors and members, across the country to gauge their reaction to the referendum, and – more contentiously – the proposed legislation allowing unrestricted abortion up to 12 weeks.

There are two stand-out trends among Fine Gael TDs and Senators. The first is a definite divide between Dublin and the rest of the county. And of the female Fine Gael parliamentarians who have disclosed their views, all bar one are strongly in favour of repeal.

The picture that emerges from the party’s grassroots is broadly similar but not as cut-and-dried. The prevailing sentiment from members in Dublin is for change but not quite as conclusive as their parliamentarians. The converse is true in rural areas, with the 12-week term in particular a source of concern.

Among women, a substantial majority fully supported the Government’s approach, particularly in Dublin and in urban Wicklow.

“It’s going to be divisive unfortunately,” says Cllr Jim Gildea from Shankill, Co Dublin. “Among branch members there are equal numbers breaking for and against. It does not seem to divide by age or by gender.

“Dún Laoghaire is a liberal constituency but I genuinely do not see one side’s view prevailing at the moment.”

There was one trend that was striking in talking to a cross-section of Fine Gael members and that was the number who refused to make their view public and won’t be campaigning. That was in marked contrast to Fianna Fáil members spoken to recently, few of whom declined to give a view.

“People who know me will be surprised by this, but I am probably not going to disclose how I am going to vote,” said Cllr Hubert Keaney from Rathcormac, Co Sligo.

“It is important that the public come through this divisive debate with an understanding rather than being influenced by so-and-so saying this is the way it should go.

“Am I playing it cute? No. It’s a very important issue and a very personal issue.”

Irene Winters from Greystones, Co Wicklow, gives a similar explanation: “As a county councillor I have no role in the formation of policy. It is a private matter as far as I am concerned.”

Finola Armstrong-McGuire, a councillor from Carrick-on-Shannon, says: “I will be holding my own counsel. I do not even see it as my role.”

That’s not to say the party’s grassroots are disengaged but there is marked reluctance to become involved, partly motivated by the divisiveness of such debates in the past.

Many referred to Taoiseach Leo Varadkar’s speech last Monday and his insistence that abortion would be “rare”. Equally, others were very impressed by Tánaiste Simon Coveney’s interview on RTÉ radio on Thursday where he articulated his concerns about the 12-week term.

“I am in the 50:50, those in the middle, and see the merit in both sides,” says Enda McGloin. “The progress of the debate will crystallise opinions one way or the other. I thought Leo Varadkar was very clear and concise. He will bring people with him although I concur that the 12-week proposal is just very difficult.”

The urban-rural divide is most clearly evident in Sligo-Leitrim. “I live in the heartland of conservatives. It’s where you would expect there to be conservative views,” is the summation of McCartan, a young politician with a long Fine Gael pedigree.

“When I consider it, my gut says that 12 weeks would be pushing it and I am no doctor and no theologian.”

Among younger party members, abortion has long been a subject of division. The party’s youth wing Young Fine Gael has officially adopted a neutral stance, as has its Fianna Fáil counterpart Ógra.

For Blaine Gaffney (28), a local area representative for Fine Gael in Sligo, his views have evolved but the 12-week proposal has caused him to pause for thought.

“The 12 weeks is scary but at the same time too, I look at those around me and look at my own wife.

“I am in favour of repeal. Before this I would have considered myself very pro-life.

“At the same time I feel like a lot of people that the 12-week provision is too much.”

There is no such doubt for Emma Blain (37), a councillor in Dún Laoghaire-Rathdown. “I am pro-choice and I am delighted that people of my generation are getting the chance to vote. The 12 weeks (proposal) in my view is a good compromise with longer periods for fatal foetal abnormalities.

“I am very pleased that Leo Varadkar has taken the stand and the initiative.”

In Strandhill, Co Sligo, Cllr Sinéad Maguire (42) says the feedback she has received from party supporters about the proposed change has been generally positive.

She said the wording of the legislation will be very important but she takes comfort from the Taoiseach’s reassurance that abortion will be “safe, legal and rare”.

“I don’t think there is a a demand for on-demand abortion.

“But unwanted pregnancies in the past were dealt with by mother and baby homes. We have seen the outcome of the Tuam baby home.

“When we could travel, we exported it. Now we have access to the internet and importing medication that people are using in an unsafe and unlawful manner.”

In Wicklow, the two TDs, Simon Harris and Andrew Doyle, are on opposite sites of the argument. That is reflected in the views of members but many are still grappling with the issues. That quandary is summed up by Cllr Derek Mitchell: “I am favourably disposed to it but it is very difficult.”

For Cllr Sylvester Bourke, the situation cannot continue where the problem is exported, or pills are imported. “We cannot keep our heads buried in the sand forever,” he says.

“I hope the legislature will reflect the mood of the people. It cannot be a free-for all but something in the interest of women and the people.”

For Shay Cullen from Newtownmountkennedy, his prime concern is about the 12-week proposal which is “too long in my opinion”. Still, like others, he will wait to see the draft legislation before reaching a conclusion.

Gráinne McLoughlin, a councillor from Kilcoole, strongly backs the proposal. “People in my own social circles are hoping that it does get through,” she said. She added that people needed to reflect the reality that “we have abortion in this country and we should not be exporting it”.

In Dún Laoghaire-Rathdown, there was substantial support for what is proposed, although a few, including Cllr John Kennedy, have some concerns.

He says the issue is nuanced and difficult, instancing cases where it is justified but saying he is against abortion on demand. “I would prefer something like a multi-option referendum,” he said.

But other councillors like Marie Baker, Mary Fayne, and Patricia Stewart are generally supportive of the Government’s proposal.

Stewart is strongly in favour of the change but believes public sentiment might be shifting. “Older Fine Gael members have more conservative views. A number of them have listened to the debate and have begun to move in the direction of leaving it to the woman and the doctor.”

On the 12 weeks issue, she says the foetus is not viable after the first trimester.

“I do not see how you could practically legislate any other way,” she says.

“Already abortions are carried out by having a pill. It is not different from the moral perspective but there is a difference in the practicalities and the process. It is taken by the woman herself under medical supervision and that makes a difference.”

“The bottom line is that women are doing it. It’s happening. We have to give political leadership to ensure that it is happening in a safe, supervised and legal way.”

Like in Fianna Fail, the views are mixed, diverse, sometimes polar. The sense, however, is the proposition will get its strongest backing from the grassroots in Dublin, and also from Fine Gael’s female members.