Markievicz remembered on 150th anniversary of her birth

Archival footage shows Countess Markievicz attending a Cumann na mBan convention in February 1922. The Irish revolutionary was remembered on the 150th anniversary of her birth at a ceremony in Glasnevin Cemetery on February 4th, 2018. Video: Reuters 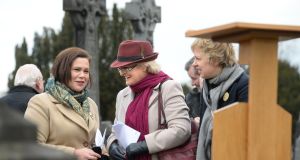 The Irish revolutionary Constance Markievicz was remembered on the 150th anniversary of her birth on Sunday for her contributions to feminism, nationalism, the labour movement and women’s suffrage.

At a commemoration ceremony by Markievicz’s graveside at Glasnevin Cemetery in Dublin, three female speakers paid tribute to the first woman member of parliament elected in Ireland and a leader of the 1916 Rising.

President-elect of Sinn Féin Mary Lou McDonald said Markievicz had thrown off the old idea that a woman could only serve her nation through her work in the home and had challenged generations of women to dedicate themselves to the cause of freedom and equality.

Not only had she been prepared to step forward herself, but “she had a real sense of the duty and responsibility that women had, and have, to achieve their aims and to achieve their destiny”.

Ms McDonald said Constance had “believed herself an honourable woman, who would sooner die than give a declaration of allegiance to King George or the British Empire”.

Republicans, then as now, had not refused the oath for “parochial reasons”, she added.

“On the contrary, it was rejected for what it stood for – empire, dominance, brutality and inequality.” Markievicz’s vista went “far beyond Ireland”, Ms McDonald said.

“She was intuitively internationalist, and the inequalities and marginalisation of communities under British rule was, as we know, not unique in its expression in Ireland. Constance knew that and she railed against it.”

Constance and her sister Eva Gore-Booth in 1896 had set up a Sligo branch of the Irish Women’s Suffrage and Local Government Association, earning them ridicule from a local farmer as seeking to set up a “petticoat government”.

“She was an ardent campaigner for suffrage and, indeed, at the foundation of the Irish Women Workers’ Union, she spoke to the women present saying that joining a union would not only help them get better wages, but it would also help them get the vote,” Ms Bacik said.

Ms Bacik said a delegation from the Oireachtas would travel to Westminster at the end of this month to present to the houses of parliament a portrait of Markievicz.

This would mark the first time parliament there would acknowledge her “immense achievement as the first woman elected an MP at Westminster”.

A wreath was laid at the graveside by Lucy Keaveney, a founder of the Countess Markievicz School, a forum on women in Ireland.

This year’s event will take place on April 28th at Liberty Hall in Dublin.