Baby gorilla with ‘big personality’ is named at Dublin Zoo

Dublin Zoo have announced that the sex of the baby gorilla born there recently is female. They have also launched a competition to find a name for the new arrival. Video: Dublin Zoo 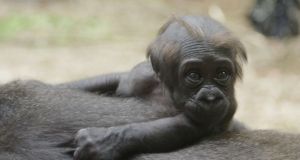 Asali, the baby Western lowland gorilla, is said to be thriving at Dublin zoo.

The baby Western lowland gorilla born at Dublin Zoo in April is to be called Asali, which means “honey” in Swahili, the zoo announced on Thursday.

The name was chosen from thousands of entries after a nationwide competition won by Ina Walsh from Athy, Co Kildare.

Staff at Dublin Zoo said they were delighted with the progress that Asali has made where she is being looked after by her parents and integrating well with the rest of the gorilla troop.

Asali has a “big personality” and has already begun to crawl around the habitat, the zoo said. She is “developing quickly” and currently weighs more than 4kg. She has six teeth and is “beginning to show an interest in solid food”.

“She has come on leaps and bounds over the past few weeks and has even developed a special bond with Kambiri, another young female in troop,” she said.

“The two spend their days playing together and Asali is learning many important life skills from this friendship. We are looking forward to watching Asali’s development and can’t wait to watch her grow into adulthood.”

Western lowland gorillas, the largest of the primates, favour quiet, tranquil environments. The design of their habitat at Dublin Zoo, called “the gorilla rainforest”, was strongly influenced by behavioural studies of gorillas in the wild.

High, rocky outcrops and trees allow the apes an overview of the surrounding landscape, while streams and dense vegetation allow the gorillas to forage and move to private resting spaces.

Western lowland gorillas are classified as critically endangered. The numbers of these primates living in the wild is expected to have fall by more than 80 per cent in the period 1980-2046.

The main threats facing the gorillas include deforestation, commercial hunting, and the highly contagious Ebola virus which is currently spreading across the Democratic Republic of Congo in Central Africa.

Dublin Zoo is part of a European breeding programme for western lowland gorillas.

The birth of Asali will be featured on Sunday’s episode of The Zoo on RTÉ 1. As well as naming the baby gorilla, Ms Walsh also won the prize of a years’ worth of free electricity from SSE Airtricity.