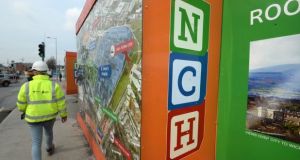 Tánaiste Simon Coveney said that work was ongoing to ensure that projects that have been committed to will be completed.

The Government has been accused in the Dáil of falsely continuing to claim there would be no delays with the delivery of major health projects.

This is despite clear warnings from the HSE that it will be almost impossible to deliver them because of cost overruns on the national children’s hospital.

Fianna Fáil deputy leader Dara Calleary said that “the only political oversight of the hospital during its inception was “oversight over the PR opportunities involved in it”.

He asked how Tánaiste Simon Coveney could says “with a straight face” that the capital plan was being finalised for 2019 when it was almost six months into the year.

But defending the Government’s approach, Mr Coveney said that work was ongoing to ensure that projects that have been committed to will be completed.

The HSE has to do a difficult job of ensuring that political commitments made are followed through on,” he said. “It’s not a cost overrun when the money hasn’t been spent. It is an underestimate.”

And he said they would endeavour to have the HSE capital plan completed before the Dáil recess.

Mr Calleary referred to a report in The Irish Times about a letter from acting director general of HSE Anne O’Connor in May to the Department of Health secretary general about the difficulty that the overruns on the children’s hospital were having on the HSE capital plan.

The letter stated that the additional impact on the national children’s hospital from 2020 to 2022 has made a very difficult situation “almost impossible”.

But the Government “continues to act as if there is no problem”, Mr Calleary said.

Sinn Féin’s Jonathan O’Brien accused the Government of “trying to pull the wool over people’s eyes”.

He said the Taoiseach stated as late as last week that there would be no delay in the capital projects. And last week, the Minister for Finance reiterated that no project would be cut or delayed as a result of the cost overruns, he said.

Mr O’Brien noted the current director general of the HSE Paul Reid had told the Oireachtas health committee on Thursday morning that “the very reason we don’ have a capital plan is as a direct result of the cost overruns on the children’s hospital”.

He added that the director general said the reason the plan was delayed was because they were still trying to ascertain what impact that cost overruns are going to have next year and 2021 and 2022.

“You can’t have the Taoiseach and the Minister for Finance saying there is no impact on the capital projects as a result of the cost overruns,” said.

Allocating capital resources in healthcare is always challenging, the Tánaiste said as he defended the Government’s approach to dealing with cost overruns.

Replying during leaders’ questions, Mr Coveney said €150 million has already been included in the capital profiles for the project in 2019.

An additional €100 million is required to fund the project this year of which the Government has decided that €24 million would come from the health capital allocation and the balance by rescheduling capital allocations in other departments.

Mr Coveney said this was out of a total proposed capital allocation of €7.33 billion this year, a 22 per cent increase of €1.33 billion on the 2018 allocation.

The Minister for Public Expenditure had stated that the State is speeding up reforms to public procurement processes and “lessons will be learned from this project”, Mr Coveney said.

1 Nphet signals strong opposition to parts of Government plan to exit lockdown
2 Q&A: What restrictions are going to be lifted next week?
3 Ireland could lose out as France lays claim to most of €5bn Brexit compensation fund
4 Covid clause: No restrictions on Santa as Government says Christmas present delivery ‘essential’
5 400 – yes, 400! – Irish retailers for all your online Christmas shopping
Real news has value SUBSCRIBE