University of Limerick criticised for 'governance failure' that may cost €1.2m 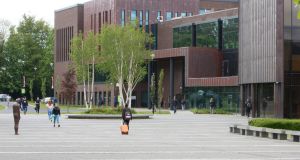 The University of Limerick: The PAC has criticised the university for a ‘governance failure that could have cost the State €1.2 million’. Photograph Liam Burke/Press 22

The Dáil’s Public Accounts Committee (PAC) has criticised the University of Limerick for what it has says is a “governance failure that could have cost the State €1.2 million”.

The findings are contained in a document circulated among members of the PAC as they finalise their latest periodic report.

A report by the Comptroller and Auditor General (C&AG) last year found that two executives at a University of Limerick subsidiary company were added to the university’s State-funded pension scheme at a cost of more than €1.2 million even though they were not university employees.

The confidential PAC document states: “The Committee of Public Accounts is of the view that the admission of staff from a subsidiary company to the University of Limerick pension scheme without a clear rationale or documentation to substantiate the claim that had been offered . . . is a governance failure that could have cost the State €1.2 million.

The awards . . . seem excessive in comparison with averages from other universities in comparable situations

The C&AG report also previously examined the practice of awarding “professional added years” for pension purposes. University of Limerick awarded a total of 324 added years between 2012 and 2016 which cost the exchequer an actuarially estimated €1.27 million by increasing the amount of lump sums paid out to retirees upon their retirement.

The PAC documents, which will feed into the committee’s final periodic report provisionally scheduled to be published in early July, state that “the awards . . . seem excessive in comparison with averages from other universities in comparable situations”.

“The committee recommends that the Department of Education and Skills complete its review of the awards of professional added years for pension purposes without delay and implement the findings of the report shortly thereafter.”

The draft PAC document also found that there are no effective controls for managing the rising cost of tribunals and commissions of investigation. It recommends that the Government and Dáil work together to put in place a new mechanism to manage the costs.

It finds that “there is not an effective control of costs for tribunals and commissions of investigation which take longer than anticipated or whose terms of reference are extended.”

Tribunals and inquiries answerable to the Department of the Taoiseach will cost more than €110 million when the final bills are paid, Leo Varadkar previously indicated.

The documents says the PAC will recommend that the costs of tribunals and commissions, and their original estimates, are published by the department on a six-monthly basis.

“The committee also recommends that department works with the Government and Dáil Éireann to establish an agreed set of appropriate escalating actions to be taken when costs associated with a tribunal or commission investigation have exceeded or are expected to exceed the estimated cost on establishment.”