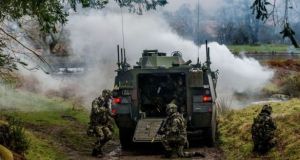 Troops from the 55th Infantry Group photographed in March 2017 during an exercise in the Glen of Imall, Co Wicklow. File photograph: The Irish Times

The Defence Forces representative body has expressed anger and frustration at the Government’s delay in publishing the Public Pay Commission report on terms and conditions over pay, recruitment and retention.

Speaking at the Oireachtas Committee on Foreign Affairs on Thursday, general secretary of Pdforra, the Defences Forces rank and file representative body, Gerard Guinan warned that “morale was on the floor” and members were “walking out the door because they’re tired of being treated like second class citizens”.

Staffing shortfalls in the defence forces continue to cause “extreme stress and anxiety for personnel and their families” while the lack of proper remuneration has “further impacted on the morale of personnel which ultimately reflects on operational effectiveness,” said Mr Guinan.

“Members on the ground are at the end of their tether with this,” Mr Guinan told committee members. “The hypocrisy is lost on them because if they were to do their job in such a tardy fashion they’d be facing military discipline. Members have had enough, they just want to see this report good, bad or indifferent.”

The current payment regime “does a disservice to all personnel”, he warned, adding that the value placed on additional hours worked by Defence Forces personnel was being “undervalued considerably”.

Mr Guinan noted that when he requested an audience with the Oireachtas Committee on foreign affairs he expected the Public Pay Commission report on pay improvements for the Defence Forces would have been published before the hearing. The delay in releasing this report has been “extremely frustrating” for members, he said.

“It is not an overstatement to say we have lost significant numbers of highly qualified outstanding soldiers, sailors and aircrew over the past few years,” he said. “These personnel left with a deep sense of betrayal and disenfranchisement that will never be assuaged. They were forced from a career that they loved and that owed them much more than they ever received.”

He reminded members of the committee that the Defence Forces were not entitled to strike but provide “essential services” to the State.

He added that members of the Army Ranger Wing were expected to serve in some of the most dangerous places on earth without proper pay. Fourteen army rangers are due to be deployed to serve on a UN mission in war-torn Mali in the African Sahel region following a vote in the Dáil last week.

Commenting on the policy of discharging sergeants when they reach 50, Mr Guinan warned that the critical experience of older members of the force was going to waste at a time when “numbers are departing in freefall”.

“Simply put, pay and allowances for our members must be addressed appropriately or not functioning organisation will exist.”