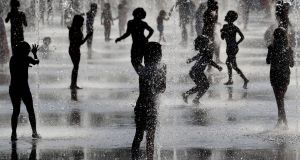 Children play under water jets in a fountain as they cool off during a heatwave in Nice in the south of France. Photograph: Valery Hache/AFP/Getty Images

Thursday is believed to have been the hottest day of the year so far with temperatures rising above 28 degrees in the west.

While the heat on Friday will not quite hit those levels, forecasters are predicting further warm conditions around the country.

“It’s going to be warm again - we are looking at temperatures of 21 to 26 degrees,” a Met Éireann spokeswoman said. “It will be a little cooler along the south coast as opposed to the east coast.”

The spokeswoman said Thursday appeared to have been the warmest day of 2019, but data to confirm this was still being awaited.

However, there are some clouds on the horizon and heavy downpours are anticipated in the west around Clare, Galway and Mayo, and similar rain is likely on the east coast on Saturday.

Met Éireann had put a heat warning in place for six counties - Mayo, Galway, Clare, Limerick, Kerry and Cork - and the sunburn index was very high with the sun at its strongest around the summer solstice.

Temperatures about the 28 degree mark were recorded in Shannon, Valentia and in Cork, Met Éireann said, but the mercury only rose to 20 degrees in the east.

While the summer conditions will stretch into the weekend, it will see the end of the “Saharan Bubble” - a heatwave that has hit much of Europe but has had a limited impact on the Irish climate.

Record temperatures of 45 degrees were expected in parts of France on Thursday while one respected Spanish forecaster Siliva Laplana tweeted “El infierno (hell) is coming”.

Schools in France were closed as a precaution. National exams on Thursday and Friday were postponed after education minister Jean-Michel Blanquer deemed it would be too hot.

In Germany, speed restrictions have been put on sections of the autobahn because of a fear the extreme heat might damage the road surface.

Closer to home, Clare Fire Service has asked the public to refrain from starting fires outdoors during the hot weather as it may cause wild fires.

Clare County Council’s chief fire officer Adrian Kelly said: “We would like to remind landowners that it is an offence under the Wildlife Act to burn growing vegetation between March 1st and August 31st in any year, on any land not then cultivated.”

Heavy showers will cross the country on Saturday night, bringing with it fresher, cooler weather on Sunday and into the beginning of next week.