Sandycove, where algal orange slick was spotted, to remain closed for another day 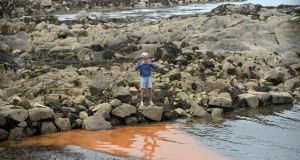 A view of Sandycove in Dublin on Tuesday where there is a swimming ban in place following overflow discharges of wastewater. Photograph: Dara Mac Donaill

Temporary swimming bans at Seapoint and the Forty Foot in Dún Laoghaire have been lifted by Dún Laoghaire Rathdown County Council.

However, a ban at Sandycove Beach remains in place after test results showed elevated levels of E.coli and enterococci.

Results form further sampling will be available on Friday, the council said.

Sandycove beach was also the location of an orange slick on Tuesday, which the council later said was a naturally occurring algal bloom, caused by nutrient rich water and warm temperatures. The council said the algal bloom did not test positive for sewage.

Partially treated waste water was released to Dublin Bay by the Waste Water Treatment plant at Ringsend. The discharge followed heavy rainfall on on Sunday and Monday last .

Dún Laoghaire Rathdown County Council said “it should be noted that all other bathing areas in the area such as White Rock and Killiney Beach continue to be open, safe for swimming and unaffected.”

Dublin City Council said it expects results of testing of water samples from Dollymount beach on the northside of the bay on Thursday afternoon. It will then make a decision on whether to lift a bathing ban there.

He said it was shocking that “people cannot enjoy the beach or go for a swim in the summer because it has been polluted to an unsafe level.

“This contamination of our beautiful beaches and pristine water has been continuing unchecked - Dublin Bay is recognised by UNESCO as an internationally important biosphere but the Government is not protecting it.”

Former Cathoairleach of Dun Laoghaire Rathdown Ossian Smyth took issue with the length of time required for testing. He called for “same day water quality testing, pre-emptive warnings following heavy rain and major sewage system upgrades to make sure people know that swimming in these conditions is unsafe and to prevent this happening again”.

In north Co Dublin, Fingal councillor David Healy the pollution was is “the result of decades of under investment in our sewage infrastructure”. Mr Healy was echoing the words of Irish Water spokesman John O’Donoghue who said the utility was playing catch up, in modernising the infrastructure after years of underinvestment.