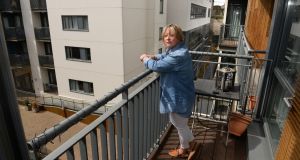 Gabrielle Kavanagh, a resident and apartment owner in Cathedral Court in Dublin 8, says she feels “trapped” after learning about the fire-safety and balcony defects in her block.

Owners at the apartment complex, which was built and is still partly owned by a development firm linked to the family which owns the O’Callaghan hotel group, have each been hit with a €5,332 bill to fix problems, bills which they say the developer – Sherborough Enterprises Limited – should be paying.

“I just have a normal job, I work for the HSE, I get my salary, I pay my mortgage for a place which I felt was safe and sound to live in, and then to be hit with this bill . . . it’s just not cutting it,” she says.

“They [the developer] knew what they were throwing up. They are still responsible and they turned their back knowing full well what they’re doing.”

The statute of limitation in cases such as these is six years from the time the issue became manifest. However, owners fear that this could mean they have missed the deadline, as the building was finished in 2006.

Do you know of a building with serious defects? Tell us about it

“I’m trapped in a situation now where, if you wanted to buy my apartment tomorrow, you can buy it, but, by the way, the fire safety isn’t good, the balcony isn’t any good . . . basically I can’t sell this place. I bought a pig in a poke,” Ms Kavanagh says.

A 2016 building surveyor’s report, authored by McGovern O’Brien, found problems with a large number of balconies at the complex. The report states that “poor workmanship and untreated timbers” caused the balconies to show signs of “accelerated deterioration”.

The surveyor listed a number of issues which would need to be addressed “to ensure that the balconies’ decks are structurally safe to be occupied”.

These balcony remedial works will cost €238,350 for the entire complex, according to an EGM invite sent by the management company.

A fire safety survey by Michael Slattery Associates last year found a number of fire-stopping shortcomings, particularly over the doors in the common areas and in the hallways of individual apartments, where fire could spread faster than it should.

Some fire doors were found to have large gaps underneath, meaning they could not contain fire, while it was also found that intumescent wrap was missing or the wrong type was fitted on waste pipes travelling through apartments and into the basement.

The fire alarm system had a number of faults which needed to be cleared, while emergency lighting and signage also needed to be upgraded. These works will cost €325,000 to carry out, according to the most competitive tender obtained by the owners’ management company.

“The balconies are a huge issue,” Ms Kavanagh says. “They should have started investigating this after the Berkeley tragedy – at the time I said to myself I presume our balconies aren’t like that because nobody has come and said to me don’t go out on the balcony.

“Now we have no choice but to question that because the balconies are rotting,” Ms Kavanagh adds. “I feel like I’m living in Legoland, like it could collapse at any minute.”