‘Prohibitive’ costs of training may have reduced interest in teaching

Academic calibre of trainee teachers has dipped but remains high 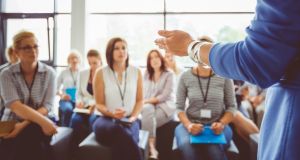 While there continues to be a significant surplus of applicants over available places for teacher training programmes, demand has fallen since 2012. Photograph: iStock

The “prohibitive” cost of training and austerity-era cuts to starting salaries may have led to reduced interest in students choosing teaching as a profession, according to a major review.

It costs up to €3,000 per year to complete an undergraduate course, while the two-year professional masters of education (PME) – which replaced the old one-year Hdip – costs a further €12,000.

This means many newly-qualified second-level teachers have to spend a total of up to six years in university to qualify as a teacher.

The findings are contained in a report commissioned by the Higher Education Authority into teacher education reforms by international education expert Pasi Sahlberg.

The report is a review of progress made in implementing reforms first proposed in 2012.

As previously reported in The Irish Times, the report notes the academic calibre of trainee teachers has dipped slightly in recent years, but remains high.

The 2012 report found that the calibre of school leavers applying to teaching programmes was “among the highest, if not the highest, in the world”.

At the time, primary teaching applicants were drawn from the top 12.5 per cent of Leaving Cert students.

This latest report notes that primary teaching applicants now score among the top 20 per cent.

“The team was impressed by the high quality of students met during the visits,” the review states.

“It was noted that the academic calibre of the intake into concurrent programmes, both primary and post-primary, remains high, although perhaps not quite as high as in 2011.”

It adds that while there continues to be a significant surplus of applicants over available places for teacher training programmes, demand has fallen since 2012.

“It has been noted that the reduction in the starting salary of teachers, introduced during the recession, may have contributed to the somewhat reduced student interest in initial teacher education programmes,” the review states.

The report also noted that graduate numbers from PME programmes has fallen by more than a third since the two-year programme was introduced in 2013/14 .

It said additional resources were not made available to universities at the time the changes were introduced.

Consequently, they decided to reduce the annual intake of students by up to 50 per cent to enable them to continue to provide high-quality programmes.

The report on teacher education reforms by Mr Sahlberg is generally positive on the progress since sweeping reforms were proposed in 2012.

The panel at the time proposed that 19 State-funded providers of teacher education be consolidated into six university-led centres of excellence by 2030.

The bulk of these proposals – such as the merger of St Patrick’s College in Drumcondra and the Mater Dei Institute of Education into DCU – have already occurred.

One of the most controversial proposals was to consolidate Trinity College Dublin and UCD’s teacher education programmes into a single centre, along with NCAD and Marino Institute of Education’s equivalent programmes.

The report notes that discussions over recent years did not advance the proposal.

Having visited the respective campuses, this latest report says full integration is not now considered necessary and they should be developed as two separate centres comprising of TCD and Marino on one hand, and UCD and NCAD on the other.