Meeting Prince Charles: 'My legs went from under me. I thought I would faint'

Prince Charles took a tour of Kilmacurragh Botanic Gardens in Wicklow on the second day of his visit to Ireland. 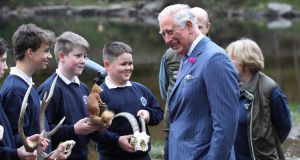 The Prince of Wales met mountain rescue teams and members of the national parks and wildlife service in Glendalough, Co Wicklow on Tuesday.

On the second day of his official visit, Prince Charles visited the Wicklow Mountains National Park where he was given a tour and introduced to staff who work in nature conservation and education programmes.

He spoke to a group of school children from Scoil Chaoimhín Naofa, who said after the meet-and-greet that he offered them advice on friendship and asked them about their plans for their careers.

Sixth-class student Oscar Stakem said after meeting Prince Charles: “I’ll never wash my hand again. I was rattling and my legs went from under me. I thought I was going to faint.”

Students Aine Duffy and Katelynn Byrne said he asked them how many tests they did every week and asked them what they planned to do when they left school.

During his trip to Glendalough, Prince Charles also spoke to Sheelagh O’Malley who was there alongside her three-year-old rescue dog, Rowan. The regional manager of the National Parks and Wildlife Service (NPWS), Wesley Atkinson joined the welcoming party.

Other members of the NPWS team were present to greet the Prince and talk about their work. They presented him with an oak seedling grown from an acorn collected from the oak woodlands in Glendalough to mark his visit. Prince Charles also spoke to a number of tourists from the US and Germany.

He is travelling to Enniskillen on Tuesday for a cross-Border themed garden party which will be attended by around 1,000 people including the Tánaiste Simon Coveney.

While Prince Charles was in Glendalough, Camilla Duchess of Cornwall was greeted by riders and horses, children with flowers and glorious sunshine when she arrived at the Avoca Mill in Co Wicklow.

The duchess chatted amicably with locals Summer (aged one) and Hunter (two) Patterson and their mother Kerry and grandmother Jo Wallace, admiring a hastily picked bunch of bedding flowers which Summer had been primed to present, largely at the behest of the media.

The duchess was then taken on a tour of the mill, which has been in operation since 1723, and was treated to a potted history of the more recent decades by Simon Pratt, whose family bought the mill in 1974 and who set about turning it into the business it is today. The family sold it to US conglomerate Aramark in 2015 for a reported €64 million.

The duchess engaged with staff during her tour of the mill, asking weavers about their craft and inquiring of weaver Martin Kenny how long he had worked at Avoca, and how the machines worked. “Twenty-seven years,” he said, before giving her a lesson on one of the mill’s older machines.

“How long would it take you to do a square?” she asked.

Mr Kenny pointed to a throw draped over the machine and said, “About 25 minutes”.

The duchess was then presented with an Avoca throw embroidered with a label bearing the names Archie Harrison Mountbatten-Windsor (the son of the Duke and Duchess of Sussex). “That is brilliant. I shall certainly pass that on, it will keep him nice and warm,” she said.

Avoca managing director Tara O’Neill told the duchess how a woman had donated to the mill a 100-year-old throw, which has been a wedding present to the woman’s grandmother. The design was then reproduced by the mill for its current “Century” range, and one of these, embroidered with the words “Your Royal Highnesses” was presented to the duchess, who expressed her delight at the gift.

Also on display for the royal visit was a typewritten letter from Buckingham Palace, dated simply “February”, thanking the mill for the shawl donated to Queen Elizabeth on the birth of her son. Staff said they thought the son had been Prince Andrew.

After the tour, the duchess joined staff for lunch, crossing the gravel as weavers and trad musicians Dinny and John Nolan sat in the sunshine playing Pete’s Polka and Happy Polka.

During the strictly choreographed visit the duchess appeared at ease and to be enjoying herself. The only concern being the occasional wobble as she sank into about four inches of new-looking gravel, which also tested the wheels of the fleet of four limousines and a people carrier which accompanied her.

At the end of the visit the duchess thanked staff for her welcome and pausing before she got into her car, crossed the car park again to say goodbye and thank you to another member of the Pratt family, Ivan Pratt, who was standing in the background. She added that she had been given “a lovely time”.

There was just a glimpse of a boot full of Avoca bags as a security man packed away a precautionary umbrella. Then with the sound of tyres spinning on gravel competing with noise from an overhead helicopter, and a flash of blue lights, the limousines and the people-carrier carrying the entourage were gone. Staff examined photos on their mobile phones, many of them smilingly telling each other: “She was lovely”.