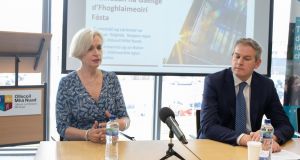 Anna Ní Ghallachair, director of the Centre for Irish Language Research at Maynooth University, welcoming the Minister of State Seán Kyne’s announcement of funding for an online course to train teachers of Irish to adult learners. Photograh: Seán Ó Mainnín

The Centre for Irish Language Research, Teaching and Testing (Lárionad na Gaeilge) at Maynooth University has been awarded funding to develop an online course which will qualify graduates to teach Irish to adults.

Minister of State for the Irish Language Seán Kyne announced a grant of €270,000 which will fund the delivery of the course during a visit to the campus on Tuesday afternoon.

The year-long, part-time course is structured across three academic semesters and it is expected to have its first intake of students in 2020.

The course, which is the first of its kind in Ireland, was developed with the intention of reaching students who could not travel to participate in the programme.

A number of workshops were held around the country to assess interest and it was determined that an online model should be developed.

The programme was inspired by a course offered at the University of Texas in Austin which features short videos focusing on grammar and other core skills related to foreign-language learning.

“The benefit of this is that those who are studying the teaching of Irish in America and elsewhere abroad can easily access the course material,” said Anna Ní Ghallachair, head of the school of Celtic studies at Maynooth University.

“It is similar to Tefl but there is nothing similar available for the Irish language,” she said.

Announcing the grant, Mr Kyne said the course would benefit the teachers of Irish and adult learners in Ireland. He said it will also provide support the Irish diaspora and those teaching Irish abroad.

“This will provide more flexibility to those who do not have the opportunity to attend courses on a regular basis and it will also provide training and qualification online in the teaching of Irish to people worldwide who are teaching Irish to adult learners,” Mr Kyne said.

“Here at home, increased access to broadband and the establishment of the Gteiceanna [digital hubs] in the Gaeltacht will mean that access to courses like this is no longer limited to towns and cities,” he added.

The teaching of Irish abroad has become increasingly popular in recent years.

“This year, we have 65 people learning Irish in the Irish College in Paris,” said Ní Ghallachair.

“More than half are not Irish. Some wish to learn Irish as a fourth or fifth language as they apply for roles with European institutions.”

Referring to Teastas Eorpach na Gaeilge, a proficiency qualification for adult learners of Irish, Ms Ní Ghallachair said examinations will be held in Los Angeles this year for the first time.

“This is in addition to Paris, Prague, Ottawa, New York and Washington,” she added.