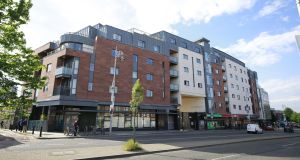 A development company controlled by members of the family that owns the O’Callaghan hotel group expects apartment owners to pay more than €5,000 each to repair building defects in an apartment block that it built and still partly owns.

Serious balcony and fire safety defects have been identified at Cathedral Court, a development of 104 apartments built off Clanbrassil Street by Sherborough Enterprises Limited (SEL) in 2006.

Owners of the apartments, some of which sold for up to €575,000, with car parking spaces costing an additional €40,000, are furious with SEL, which is the majority owner in the complex. The firm retained 64 of the apartments, which are used for luxury lettings.

A building surveyor’s report found problems with a large number of balconies at the site in 2016, while a fire safety survey last year also found a number of fire-stopping shortcomings.

The private owners say Paul O’Callaghan, a son of hotelier Noel O’Callaghan and a director of SEL, has a clear conflict of interest as one of only two directors on the board of the owners’ management company.

Paul O’Callaghan has denied this, while also saying he would use his position on the board to make sure that owners pay their portion of the €563,350 bill – unless the owners’ management company obtained “compelling” legal advice that SEL should cover it all.

In February, before any private owners were made aware of the issues, Paul O’Callaghan informed the owners’ management company that SEL had already carried out remediation works on the three penthouse apartments it owned and expected the €15,000 cost of this to be paid out of the management company’s sinking fund.

The other director of the owners’ management company (OMC) – a private owner – objected to this, and in an email – seen by The Irish Times – said: “I don’t believe that the OMC or residents expect to pay to repair defects on your private floors, or indeed anywhere in the development, where defects are due to improper building methods or lack of compliance with applicable safety standards.

“I believe SEL as developers of the building will need to directly bear the cost of all rectification works that are related to improper or substandard building of the development.”

Paul O’Callaghan responded to say SEL had obtained legal advice that stated “we do not have a legal obligation on this matter” and advised the other director to seek legal advice on behalf of the owners’ management company.

“Unless you have a compelling legal argument to put forward we absolutely will not be paying for this,” Paul O’Callaghan wrote in a follow-up email dated March 1st.

He also said that if no compelling legal advice contrary to their own was found, SEL would use its majority vote at an EGM to push through the remediation levy on all owners.

“Unless I get a proper thorough legal document which clearly outlines why SEL should be remedying the issues, then we will just vote them through ourselves,” Paul O’Callaghan wrote in an email.

The EGM referred to in the emails took place on April 17th. Owners were supposed to vote on two issues – introducing a levy for the works and nominating Paul O’Callaghan’s brother, Charles O’Callaghan, as another owners’ management company director.

The chairman of the meeting, a private owner and director of the management company, blocked these votes because “members had not been fully informed and the resolution inherently accepted without discussion that the OMC would pay for the work”.

Minutes from the meeting state that “several members expressed anger that the developer would not simply rectify the problems”, while another member said that “this is not only a legal issue but a moral issue . . . this work should be done by SEL because it is the right thing to do”.

One member asked that the minutes reflect “she had never attended a meeting where someone had been so patronising as Paul O’Callaghan”, while another stated that he had been “very rude”. Mr O’Callaghan responded to say he felt “attacked”.

The 2½-hour meeting concluded with the agreement that the owners’ management company would seek independent legal advice on pursuing the developer.

The O’Callaghan Collection includes The Alex, The Green, The Davenport and The Mont hotels in Dublin, as well as The Tamburlaine in Cambridge and The Eliott in Gibraltar.

Keenan Property Management, the managing agent for the OMC, did not respond to requests for comment.