Surrogacy in Westmeath: ‘I had no bond with the baby, which was fantastic’ 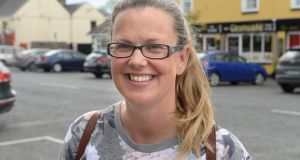 A local election candidate has spoken candidly about her recent experience as a surrogate for her friends and about her relief that she didn’t feel a bond with the child following his birth.

Westmeath-based Fine Gael candidate Becky Loftus Dore, who is a mother of four, gave birth late last month to a baby boy who was conceived through IVF. She says that despite her best efforts during the pregnancy to distance herself emotionally from the child she was carrying, she was concerned that she would have a bond with him when he was born.

“To be honest, I didn’t feel any connection or bond during the pregnancy. Right from the beginning, I knew I had a job to grow it. It has no biological connection to myself or my husband. It was something that I put into the deal: I wasn’t going to donate my egg or anything like that. It was a complete donor embryo.

In my house we weren’t talking about baby names, we weren’t getting things down from the attic

“It really finished off the way it started. I was fully aware that this was not my baby. When I looked at the baby it didn’t look like any of my children. Right from the beginning, his parents took responsibility. It was literally like I went in for an operation and I came home to recover.”

Loftus Dore believes “lots of little factors” contributed to her not having an emotional bond with the child.

“We very much took a normal kind of pregnancy, and we split it. All of the preparations were in [the parents’] house and in their conversations. In my house we weren’t talking about baby names, we weren’t getting things down from the attic, so even visually there was no reminder that we were preparing for a baby. I definitely think that played a part in the whole process.

“For me, it was a shock. I didn’t verbalise it, but I definitely had it in my head to be prepared for a connection, a twinge, something but it just wasn’t there.

At the moment surrogacy is happening in Ireland, but it is very much within family members or with very good friends like us

“It’s good for me and my mental health that it was like that and good for them too. The parents also had that worry: ‘Is Becky going to feel bonded or upset?’ They were equally relieved with how things turned out.”

Loftus Dore didn’t receive payment of any kind, although she did joke that the couple owe her a lot of babysitting hours.

The lack of a legal framework in the country at present surrounding surrogacy – new legislation is being debated in the Seanad – means that for all parties involved, trust is key, Loftus Dore says.

“At the moment surrogacy is happening in Ireland, but it is very much within family members or with very good friends like us, where there is that trust. As the legislation comes in we will definitely be moving to a situation where there will be agencies popping up, where you will be matched with a surrogate.

“As it stands at the moment, as I am a married surrogate: as soon as the baby is born, myself and my husband are the legal guardians of that child. The father can apply to the courts for guardianship. We have joint custody then, and after two years I can sign over my legal rights to the child. On the back of that, the mother can apply for joint custody of the child.”

After taking a week off to recover from a Caesarean section, Loftus Dore was back out canvassing in the Kinnegad electoral area.

A native of Wicklow who moved to the Westmeath village of Killucan only two years ago because her family was priced out of the housing market closer to home, she is already firmly embedded in her new community and is a member of numerous organisations.

It was lovely to get those emails, which showed that sometimes your story can give people hope

She says she decided to speak about her surrogacy experience for a number of reasons.

“If people saw me pregnant, I didn’t want them to think that I would be going on six months’ maternity [leave] if I did get the job – that I am now ready to work if the opportunity is given to me.

“The response has been very positive. I got a lovely message from one person who was in my area. She said that she had read my story and that it gave her a glimmer of hope for her and her partner to have a family in the future.

“It was lovely to get those emails, which showed that sometimes your story can give people hope or let them know that they are not alone. There are other people going through similar challenges.”