$60,000 put up for whereabouts of Columba McVeigh, Joe Lynskey and Robert Nairac 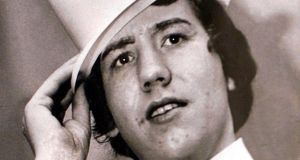 The Independent Commission for the Location of Victims’ Remains (ICLVR) has said a $60,000 (€54,000) reward is being offered via an anonymous donor for information leading to the location of the final three Disappeared victims.

The Disappeared is a group of 16 victims who were abducted, murdered and secretly buried by republicans during the conflict in Northern Ireland.

So far, 13 of the 16 Disappeared victims have been recovered but the remains of Columba McVeigh and two other men – former Cistercian monk Joe Lynskey and British army captain Robert Nairac – are unaccounted for.

ICLVR has said a reward of $20,000 will be paid for information on each of the three outstanding Disappeared cases if it results in the location and recovery of the remains of any or all of them, as it will have helped “close a chapter of a terrible story in the lives of families who have suffered decades of torment not knowing where their loved ones were buried”.

ICLVR lead investigator Geoff Knupfer explained that through the CrimeStoppers charity an anonymous donor had offered the rewards.

Mr Knupfer said: “Neither CrimeStoppers nor the ICLVR know the identity of the donor.

“A reward of $20,000 in each of the three outstanding cases is substantial and whether or not it helps bring forward information that we haven’t had to date and which results in the location and recovery of the remains we’ll have to wait to see.”

Mr Knupfer said if new information comes to light this would be “a hugely significant breakthrough”.

“We should never lose sight of the fact that the whole issue of the Disappeared is fundamentally a humanitarian one,” he said.

“There are three families who have suffered so much and are still waiting for their loved ones to be brought home for Christian burial. That is the sole remit of the ICLVR.”

He emphasised that any information that went to CrimeStoppers would be passed only to the ICLVR and to no one else and that all information would be treated in the strictest confidence.

“We are entirely information-driven. We can give a cast-iron guarantee which has been borne out over the 20 years that the ICLVR has been in operation that any information received can only be used by the ICLVR to locate and recover the remains and it will never be shared with any other State body for any other purpose.

“If information comes forward as a result of this reward, it will be treated in exactly the same way.”