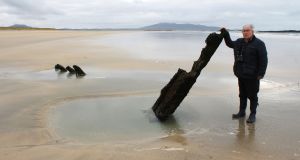 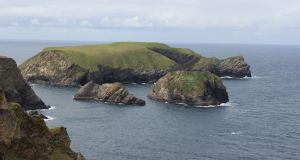 Continued erosion on the Atlantic seaboard has exposed the remains of a shipwreck on the south-west Mayo coastline.

The wreck is clearly visible at low tide at Thallabawn beach, just north of the mouth of Killary Harbour.

Archaeologist Michael Gibbons, who has examined the vessel, says it is a classic example of a wreck, but its identity is unknown. It could date from the late medieval period onwards and in an area replete with shipwrecks, he notes.

One of the best known wrecks in the Killary fjord is the sailing vessel Gem which was en route from New York to Galway when it foundered on January 18th, 1849.

Separately, research conducted by Mr Gibbons further north in the mouth of Broadhaven Bay suggests that a monastery or a late Bronze Age or early Christian fortress was built on Kid island, also known as Oileán Mionnán.

The cliff-bound outcrop marking the eastern approaches to the bay rises some 86m above sea level, and is used for summer sheep grazing. Mr Gibbons had to make four attempts to land by currach, due to swells, with the assistance of local boatman Padraic Ó’Domhnaill and his teenage son Pádraic.

Mr Gibbons had already noted a low circular earthwork enclosure which was visible on satellite photography of Kid island. His visit confirmed a sub-rectangular structure within an enclosure close to the western side. Both the enclosure and the structure are largely earthen with a small number of stones visible including a single white quartz boulder on the north wall, he said.

“The enclosure seems likely to be a small ringfort containing a rectangular building and likely to be of early Christian date,” he says. “ It is possible that it is the site of a small sod oratory although there are no direct indications that it is an ecclesiastical site.”

A possible second enclosure was report to him by Jane O’Shaughnessy to the south of the first, he says, but it was not apparent on the ground - although any extant remains may have been obscured by the long grass.

The enclosure is surrounded by a field system, which is similar to that on the Inishkea islands where early Christian buildings are also surrounded by worked land.

Kid island has had “little presence in the archaeological or historical record” to date, but has been the setting for a series of “terrifying supernatural events” gathered by folklorists Séamas Ó Catháín and Patirck O’Flanagan in the 1970s, Mr Gibbons noted.

The Broadhaven Bay island is reputed to have been formerly attached to the mainland. However, a local semi-mythical figure named Donnchadh Chroích, who wore a red hangman’s cap, was known to kill unbaptised children at the location, and hang their bodies on a cross to be picked clean by the birds of the air.

A local woman appealed to St Martin who severed the area from the mainland, leaving two goats on the island from which it got its name, Mr Gibbons says. A cave on the island named after Donnchadh and notorious for its rough waters, was avoided by fishermen on St. Martin’s day.