Woman dies after car crashes into a tree in Co Galway

Incident happened on the Killimor to Kiltormer Road, off the N65 at Lisdeligney 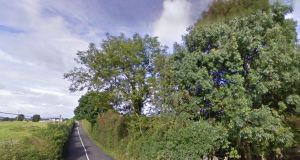 A woman in her 50s died after the car she was driving left the road and struck a tree near Portumna, Co Galway, on Sunday morning.

The incident happened on the Killimor to Kiltormer Road, off the N65 at Lisdeligney at about 8.30am.

The woman was the sole occupant of the car and was pronounced dead at the scene. Her body was removed to Portiuncula Hospital in Ballinasloe. A post mortem is to be arranged.

The road is currently closed for a technical examination and diversions are in place.

Gardaí are appealing for witnesses or anyone with information, particularly those who may have travelled the Killimor to Kiltormer Road between 7.30am and 9.30am on Sunday morning to contact them at Loughrea Garda Station on 091 842870, the Garda Confidential Line on 1800 666 111 or any Garda Station.

On Saturday, a woman in her 70s died after a two-vehicle crash in Co Derry.

The crash between a red Kia Soul and a black Mazda happened on the Hillhead Road near Castledawson just after 10.40am.

A police spokesman said three other men were taken to hospital for treatment but their injuries are not believed to be life-threatening.