DUP losing its grip on Ballymena ahead of North’s election 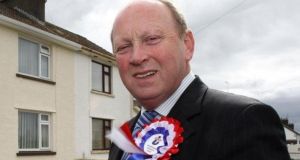 If the Northern Irish bible belt had a buckle, it would be Ballymena.

As with the pulpit, the Big Man’s Democratic Unionist Party is still a powerful force in Ballymena. The DUP’s three local members of the Stormont Assembly smile down from placards on lampposts across the town.

But there are signs that the DUP’s grip on this corner of Antrim is loosening.

“I know Ian Paisley [jnr, the local MP]. I knew his father, but the DUP isn’t the party it used to be,” says hotelier Martin Boon.

Like many in Ballymena, Mr Boon describes himself as a traditional DUP voter. But he won’t be backing the party when Northern Ireland goes back to the polls on March 2nd. “You can’t trust them anymore,” he says.

The DUP’s reputation for financial – and moral – rectitude was forged in places like Ballymena. The botched renewable heating incentive (RHI) scheme, in particular, has badly damaged that image, at least for some.

“People are disillusioned. It just seems to be scandal after scandal,” says David Ross, who works in the community and voluntary sector. Having voted DUP in the past, this time around he is going with the more hard-line Traditional Unionist Voice (TUV), led by one-time DUP MEP Jim Allister.

“There is growing support for the likes of Jim Allister. There is an integrity there that at one time the DUP was based on, but now people are starting to question that,” says Mr Ross.

With its independent boutiques and colourful craft shops, Ballymena retains a stolidly prosperous air. But locals complain that the once bustling streets have grown quiet, that their party has not done enough to reinvigorate its heartland amid a series of factory closures.

Based on last May’s results, the party should have little difficulty retaining the three seats it first won here in 1998, even allowing for a reduction in constituency size (from six to five seats) across Northern Ireland.

But there is a notable spring in the step of the DUP’s unionist rivals.

“There is definitely an appetite. A lot of people here were brought up to vote DUP. Now they are starting to look at what the DUP stand for and ask questions.”

On paper, Mr Gaston should have been a natural DUP candidate. A practising Free Presbyterian, he is the son of a former DUP councillor. During election campaigns pater familias used to drive Paisley through Ballymena on his milk float. “There is a long Paisley history in my family,” says Gaston with a smile.

The Gaston family’s commitment to Paisley – and the DUP – ended in 2007, following the St Andrew’s Agreement with Sinn Féin.

“I listened to Paisley preaching for years about how wrong it was to share power with terrorists. When Paisley went against what he had been preaching for 40 years, then I became interested in politics,” says Mr Gaston.

There is a palpable sympathy for the TUV’s particularly conservative brand of politics in Ballymena – which voted for Brexit – but translating that into two seats would be a major surprise. The DUP remain the best organised party in Northern Ireland, as the poll-topping performance last May, when Arlene Foster’s party took 38 seats, attested.

On a bitterly cold weekday afternoon, DUP MLA Paul Frew is canvassing support in Ballee, a working-class Protestant estate on the edge of Ballymena. He is a young-looking 42, with an evident zeal for electioneering. “I always knock doors, election or no election,” Mr Frew says.

Most of the pebble-dashed terrace houses are empty, but those that are not receive Mr Frew with a polite smile. His message is a heady mix of Orange vs Green politics – “vote DUP to keep Sinn Féin out” – and old-fashioned constituency graft.

“See those trees?” Mr Frew points at a spattering of bare trunks clustered on a low hill overlooking the estate. “We got them topped last week. They were overgrown and causing problems on the path.” Nearby, three football fields have been drained, and a large two-storey, cream-coloured community centre opened last year.

Mr Frew, who joined the DUP in his early 20s when he was a member of a local Orange lodge, dismisses the current election as “a manufactured crisis”.

He admits that “mistakes” were made in the RHI scheme – there 276 RHI boilers around Ballymena and Ballymoney, one of the highest levels in Northern Ireland – but is adamant that “there is no massive scandal”.

“Yes, we probably will take a hit. Two or three per cent, I don’t know. But the question is: ‘who benefits?’ Or will people just stay at home.”

Among those hoping to benefit are the Ulster Unionists.

Robin Swann took the last seat in May with less than a quota. The soft-spoken, diminutive man will need to attract wavering Democratic Unionist voters to have a realistic chance of holding on.

“This is DUP heartland. But this election is totally different, people want to talk. They are angry,” says Mr Swann. “People understand RHI. RHI is £85,000 a day. That’s seven hip operations a day.”

The scale of the RHI overspend is not just a matter of probity. Many feel it is money that towns like Ballymena – who often complain of being overlooked in favour of Belfast – could use locally.

Long a centre for Northern Irish manufacturing, Ballymena has suffered a series of setbacks in recent years. Michelin tyres is set to close in 2018 with the loss of 860 jobs. Production at the JTI Gallaher cigarette factory will cease by May. A brownfield site decorated with red poppies near the town centre has lain empty since the Ballymena Construction Company shut.

Keith Turner has seen a marked decline in his trout fishing business. “These days its considered a luxury item, it didn’t use to be like that,” says Mr Turner, a jovial, broad-shouldered English man whose first taste of Northern Ireland was as a part of the Royal Irish Regiment in south Armagh in the early 1990s.

“I saw that David Trimble and John Hume were trying to bring peace to a country that I didn’t understand but I knew needed peace.” Mr Turner joined the Ulster Unionists after moving to Ballymena. “I wanted to support a party that brought the peace.”

Ballymena largely escaped the worst of the Troubles but gained a reputation for often vicious sectarianism. The Catholic church at Harryville was the scene of repeated loyalist protests before eventually being razed to the ground.

The murder of 15-year-old Catholic Michael McIlveen – beaten with a baseball bat by a gang in 2006 – has been back in the news after two of the men found guilty of the killing launched appeals against their convictions.

A mural of King Billy atop a white horse looks down from a gable end. There is, however, a significant Catholic minority, particularly around Dunclug where Sinn Féin MLA Philip McGuigan draws much of his support.

Originally elected to Stormont for North Antrim in 2003, Mr McGuigan returned to the Assembly last August after Daithí McKay’s resignation over his links with loyalist blogger Jamie Bryson. Mr McGuigan’s co-option was not universally popular – a raft of Sinn Féin activists left the party in protest – but he is expected to hold his seat despite a challenge from former SF councillor Monica Digney.

“I haven’t seen people as motivated to come out to vote in 10, 15 years,” says Mr McGuigan, who lives in nearby Dunloy. “The RHI scandal and the attitude of the DUP has really motivated people. This is a landmark election.”

The bespectacled 42-year-old holds out little hope for a swift return to power-sharing at Stormont: “We have no intention of going back unless there is an attitude change in the DUP, unless there is a real partnership based on equality and respect.”

“The DUP attitude here is ‘we rule and we give nothing’,” says Mr O’Loan, adducing £60,000 (€70,000) spent on a Somme commemoration at the same time as funding was denied for an Easter Rising study trip to Dublin.

“The whole mood of the council is very much ‘this is a unionist stronghold, we take everything in front of us’,” says Mr O’Loan. “When it comes to symbolic issues, it is all one-sided, it is all all about the military, about flying the flag.”

Preachers occasionally hold fort from the bandstand in the centre of Ballymena. “Abortion Is Murder” declares a sign in the window of a charity shop. Proprietor Leonard McAuley grew up a republican, but switched to the DUP because of the party’s pro-life stance.

“But I’m not sure this time,” says Mr McAuley. “I don’t know what is going on with the renewable heating business, but they are covering their backs, they are not being completely honest.”

The DUP is hoping to galvanise core voters with dire warnings of the dangers of Sinn Féin, but even in Ballymena there are signs that, almost 20 years on from the Good Friday Agreement, some people want more from their political leaders.