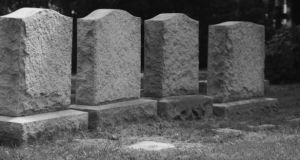 Undertakers have “serious concerns” about land earmarked for a new public cemetery in Killarney, it has emerged .

The five acres of grazing land on a rural road off the N22 is being put forward this Tuesday at a special council meeting, as Killarney runs out of space for graves.

The Health Service Executive has told the council there “is an absence of specific guidelines” on planning burial grounds in the Republic and they rely on those of Northern Ireland.

The chief concern is leachate from body fluids and cancer-causing embalming fluids into groundwater and the HSE has asked that a public well near the lands be specifically identified.

Some 68 residents have said that the site, which is near a river, floods and there is poor drainage. Photographs have been submitted showing flooding on the land and surrounding road.

With 110 deaths each year on average in Killarney, and only 10 new double grave plots left in Aghadoe cemetery, Killarney is likely to run out of grave space in 2017 and husbands and wives will not be buried together, a council meeting was told recently by Cllr Maura Healy-Rae.

The council is proposing to acquire the five-acre site at Knockeenduff in rural Killarney and may move to do so by compulsory purchase order.

In 2012, they were underbidders for the parcel totalling 12 acres which was sold for more than €330,000 at auction. About half of this – the side farthest from the Glanooragh river – is now being urged following a consultant’s report and the special meeting is taking place to consider the submissions from the public.

In documents to be put before a special meeting on Tuesday afternoon, the HSE notes that there is a record of an Irish Water public supply well 500 metres from the site – and the precise location is unclear and needs to be identified to protect the ground water supply from contamination.

Cllr John Joe Culloty wants a Columbarium wall for cremations and he is also asking for an altar for annual Masses.

Mayor of Killarney Brendan Cronin is calling for an upgrading of the local roads – and says he is satisfied “the site is more than suitable” for a public cemetery.

However, O’Shea’s Funeral Home, Killarney’s main undertakers, said they have studied the risk assessment and have “serious concerns” about the site selected.

“It would appear that more than half the site is not suitable for double burials and this would have many long-term implications for families purchasing a double plot,” O’Sheas said.

Aghadoe has only 10 double plots left What does Kerry County Council propose to do for the bereaved people of Killarney in 2017? they ask.

They also ask what provisions have been made for non-religious burials and accommodating other religious beliefs, eg that Muslims will not be buried beside Christians, and also for a Columbarium wall for crematoriums.

In a detailed 20-page submission, 68 residents have taken issue with the consultant’s assessment of the site, saying trial pits were not left for the requisite time and say the site – which is bounded to the south by a river – has poor subsoil drainage and floods.

Some 44 other residents have no major issue with the cemetery, but they point to the poor condition of the road leading to it.

Kerry County Council manager Angela McAllen in a report, which will be put before the eight-member Killarney Municipal District meeting, says detailed analysis, including extensive site investigations and environmental impact assessment screenings, have been undertaken and the council is satisfied Knockeenduff is suitable.