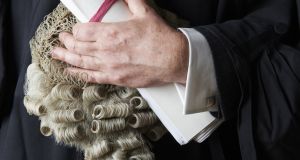 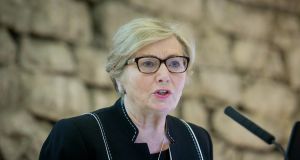 Tánaiste and Minister for Justice Fitzgerald. The submissions to the Department of Justice on defamation reform follow the announcement by the Tánaiste of a consultation process as to the operation of the 2009 Defamation Act. Photograph: Gareth Chaney/Collins

At a time when the traditional media is under severe financial pressure, the onerous nature of Ireland’s defamation regime is making matters all the more difficult, submissions on defamation reform have argued.

The Irish defamation regime, and in particular the size of jury awards here relative to those in neighbouring jurisdictions, does not just burden the Irish media with ongoing onerous costs, it also directly affects the efficacy of Irish reporting and comment, the submissions argue.

The submissions to the Department of Justice follow the announcement of a public consultation process by the Tánaiste and Minister for Justice and Equality, Frances Fitzgerald, as to the operation of the 2009 Defamation Act.

Not only does the regime create an atmosphere of self-censorship, it also allows those with the wealth to do so to use the courts, as The Irish Times put it, “to bully the media”.

Given the amounts of money that can be involved, it is almost impossible to prevent that bullying having some effect.

The Press Council said it is concerned that the media’s confidence in publishing robust commentary is being threatened by the fear of unreasonable and frequent threats to initiate proceedings from a very small number of persons whose access to finance may be disproportionately greater than that of the press.

The council did not name any names, but the largest shareholder in Independent News & Media (IN&M), Denis O’Brien, is well known for the number of times he has initiated, or threatened, defamation actions against media organisations in recent years. Dermot Desmond, also a shareholder in IN&M, is also recognised in the media sector as someone given to initiating, or threatening, action through the courts.

At the heart of the submissions is the huge size of Irish defamation awards relative to those in other jurisdictions. While the role juries have in deciding the size of awards is one of the issues canvassed, it is also the case that judges, up to the Supreme Court, have also supported awards that are multiples of what applies in, for instance, personal-injury cases.

As stated by the Tánaiste when announcing the review, defamation law has to strike a balance between the right to freedom of expression in a democratic society and the right to protect one’s good name from unfounded attack.

IN&M, in its submission, said the 2009 Defamation Act was initially seen as designed to shift the balance towards greater support for freedom of expression, but in the event failed to do so. “Until the unfair, antidemocratic and damaging underprotection of free speech is meaningfully addressed, Irish defamation law will continue to be unfit for purpose and will continue to generate considerable controversy.”

Most the submissions mention the €1.8 million defamation award granted by the High Court to PR executive Monica Leech in 2009, arising from a series of articles published by IN&M. The size of the award was appealed to the Supreme Court, which reduced it to €1.27 million, while at the same time saying that the libel was at the higher, but not the highest end of the defamation scale. IN&M is currently appealing the decision to the European Court of Human Rights.

Although people who feel they have been defamed by the media can go to the Press Council, the experience of The Irish Times is that only 15 per cent of complainants in the past four years have chosen this route. The rest, 85 per cent, have chosen instead to take the litigation road. It is clear that the size of the awards being issued by the Irish courts is a crucial factor in this.

Defamation actions in the High Court are unusual in that they are heard by a jury (personal-injury cases are decided by a judge). Complainants can take cases in the cheaper, non-jury Circuit Court, where awards up to a maximum of €75,000 are allowed. The retention of juries in defamation actions in the High Court is a recognition of the long-recognised view that community values in relation to a person’s good name are reflected in this way.

However, many of the submissions argue that the involvement of juries adds to costs because of the extra time and complexity they introduce, and that the issue of costs is one of the factors that prompts media outlets to settle rather than risk going to courts.

Sometimes media outlets are faced with decisions as to whether to contest a case taken by a person of little means, who probably has a legal team acting on a no-foal, no-fee basis and who would not be in a position to pay any costs if he or she loses.

In other words, either way, the media outlet loses.

Many of the submissions argue for the ending of jury involvement in trials, and if that is not done, then the ending of jury involvement in deciding damages. It is pointed out that, for personal-injury cases, the most catastrophic of cases lead to awards of about €450,000 for general damages (ie compensation, excluding costs of future medical care, etc).

A new regime where awards of such a size would be at the extreme end of the scale for defamation cases would go some way towards bringing Ireland back towards the European norm, though only some of the way.

However, as stated, it is not just jury members who have caused Irish awards to be so high. The Leech award, set by the Supreme Court, is a dark cloud over freedom of expression in Ireland. It has “effectively set (the benchmark) for a huge subterranean out-of-court settlement culture,” according to The Irish Times.

The submissions have a range of suggestions on other matters, such as difficulties with asserting a defence of fair and reasonable publication, and how reluctance to mount such defences “leads to an increasing degree of pre-publication self-censorship”.

The 2009 Defamation Act holds that the plaintiff in a defamation case has the benefit of a presumption of falsity – ie it is up to the publisher to prove that the statement complained of is true. The department has been asked to adopt a recommendation made by the Law Reform Commission as far back as 1991, that this presumption be abolished.

It has been also pointed out that the media has to operate in a regime where very sizeable awards are at times paid out over very simple human errors. NewsBrands, formerly National Newspapers Ireland, of which The Irish Times is a member, points out that in one recent case a solicitor was awarded €140,000 having been mistakenly identified as his client, who was facing fraud charges, on the TV3 news.

“He was on screen in a news item for seven seconds and an apology, albeit not in agreed terms, was broadcast within a day of his complaint being received and four days after the original report.”

The decision was made by Ms Justice Iseult O’Malley, in the High Court, as part of a process under the 2009 act that does not involve a jury and where an offer of amends can be agreed or determined by the court. Were it not for the offer of amends made by TV3, the judge, relying on the Leech ruling, would have awarded €200,000, NewsBrands said.

The Irish Times, referring to its submission, said it was not trying to defend bad journalism, but rather seeking to ensure the survival of a quality press, which is an essential pillar of a democratic society.

The costs associated with Ireland’s defamation regime, it said, are a genuine threat to that pillar.