A Russian cruiser with ‘cannibal rats’: What other ‘ghost ships’ could be out there?

A ghost ship was washed up onto the rocks off east Cork by Storm Dennis on Sunday, after drifting across the Atlantic over the last year. Video: Irish Coast Guard 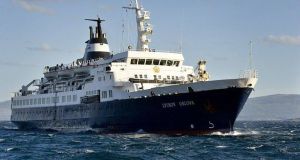 The Russian liner Lyubov Orlova: ‘Somewhere in the vast expanses of the North Atlantic an empty Russian cruise ship has been lost and if it’s still afloat, its next port of call may be the coast of Ireland.’

The running aground of “ghost ship” MV Alta, on rocks near Ballycotton in east Cork on Sunday, was not the first time such a derelict vessel has haunted our shores.

In 2014 there were reports that the abandoned former Soviet cruise liner Lyubov Orlova was off the Irish coast bringing with it ominous headlines warning of “cannibal rats” aboard a “ghost ship” heading our way.

The Irish Coast Guard on Tuesday said it suspects the liner has probably sunk but is “still vigilant” in relation to it. The 4,200-tonne ship was once the glittering choice of Soviet holidaymakers and later wealthy Russians touring the Artic and Antarctic.

It is one of a number of ‘ghost ships’, unmanned but still afloat at last sighting, the whereabouts of which are now unknown.

The 100m long Lyubov Orlova was seen adrift off the coast of Newfoundland in February 2013. The ship had been sold for scrap and taken under tow from St John’s, heading for the Dominican Republic. But less than a day into the journey the tow line broke and the ship drifted into international waters.

As National Geographic put it in March 2014, “somewhere in the vast expanses of the North Atlantic an empty Russian cruise ship has been lost and if it’s still afloat, its next port of call may be the coast of Ireland”.

Finding such a ship in the ocean is not easy. The International Maritime Organisation’s International Convention for the Safety of Life at Sea requires international ships, with 300 or more gross tonnage and all passenger ships, to carry beacons which function as automatic identification systems (AIS).

Historical AIS data is also used for analysing the vessels movements on a global scale. In the case of the Lyubov Orlova, it would probably have its transponders off because power ran out. In addition, satellite recorders are not able to easily find a ship in the vast Atlantic unless they know a precise area in which to look.

In its efforts to find the cruise ship the Irish Coast Guard combined AIS tracking with radar allowing it to “see” the ghosts . First, radar satellites scanned vast areas of the sea surface, where vessels showed up as blips as on a radar screen. These were then cross-referenced with AIS satellite maps, which showed the positions of all the active ships. In theory, the ghost ship would be the only radar blip not broadcasting a signal. During efforts to find the Russian cruiser an illegal fishing vessel near Scotland which had its transponder turned off was discovered.

But all attempts to locate the MV Lyubov Orlova by the Irish Coast Guard proved unsuccessful.

In 2016 another unmanned vessel washed up on Irish shores. In November of that year a makeshift solar-powered houseboat landed on a beach in Co Mayo after drifting across the Atlantic from Canada. Authorities said the owner of the 20ft timber and polystyrene boat was intending to sail on the “floating caravan”, but was talked out of it before it broke loose from its mooring in Newfoundland. It turned out to have been built by Rick Small, a Canadian environmentalist who had given the boat away and had no idea how it ended up crossing the ocean unmanned.

In December 2000 a Spanish boat, Zorro Zaurre, drifted 140 miles to the southwest Irish coast before foundering on rocks yards from where its sister ship, Nuestra Senora de Gardotza, sank 10 years earlier at Roancarrig lighthouse in Bantry Bay, Co Cork. The 13 crew members had been airlifted a month earlier after the vessel sprang a leak.